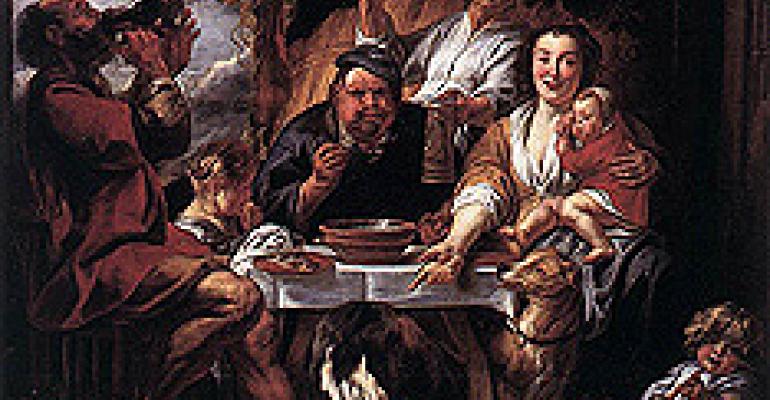 HOIST THEM BY THEIR OWN PETARD

A lot of mainstream media outlets found it noteworthy that a food world nobody like Langbein is regularly taking on New York Times critic Bruni and apparently getting the best of the exchange. Stories about her blog (http://brunidigest.blogspot.com) have appeared in USA Today and the Washington Post, and the Associated Press story that started it all has been commented on in online outlets ranging from Yahoo to, well, here. But Langbein says she bears no inherent ill will toward the man. "If you hate Bruni, I'm not your mascot, and if you think he's great, well, I'm thrilled. Like a feather duster on a vestigial prostate, Frank Bruni's style tickles me; I find it funny and I respond. If you see vitriol, you've made it up."

Oh, but if you're an operator whose restaurant has been the recipient of what you considered an unfair review, you're going to find this blog rich. Here's how Langbein describes her work's premise:

"I sit on a dirt mound somewhere in Brooklyn with my ears pricked, waiting for New York Times head restaurant critic Frank Bruni, who I imagine to be a Venetian count in a huge ruffled collar, to dole out stars from the inside breast pocket of his brocaded chamber robe. This blog is predicated on the suggestion that every Wednesday, in the Times Dining Out section, Frank lays a huge Faberge egg of hilarity."

Langbein's technique is to deconstruct each Bruni review by taking individual paragraphs from it and then riffing on each one, wondering what the heck was going through Bruni's mind when he wrote it. As it turns out, a disassembled review sounds pretty goofy in its own right, and Langbein knows how to make it seem even sillier.

"The most riveting of the small plates, and one of the least small, was thin slices of eye round of beef, which had been dusted with sweet rice flour and seared in oil. These cutlets were more ethereal than I realized fried beef could be - maybe too ethereal, and thus an illustration of one of the restaurant's frustrations. The kitchen turned out a great deal of food more intriguing than satisfying, with a sense of surprise that wasn't matched by a payoff in flavor."

Standard critic-speak, but what the heck does it mean?

Langbein then imagines how the kitchen would handle this complaint if Bruni had sent the beef back. "TOO ETHEREAL. TOO ETHEREAL. Hey Lannie, couldya do somethin' about that beef? It was too ethereal. Maybe you could drag it through some compost? I don't know...just something a little more...how to say...terrestrial? Thanks!"

You'll want to read this blog because it's so entertaining (good pictures, too). But the larger news here is that it demonstrates the emerging power of the blogosphere (along with that of prominent food web sites likes egullet.org, chowhound.com and others) and underlines the waning power of print-bound newspaper restaurant reviewers.

After all, Langbein is a 24-year-old from Brooklyn who works for New York City's cultural affairs department and she's armed with only a laptop and an opinion. Yet she has single-handedly undercut the authority of the New York Times restaurant reviewer. Standard practice for New York City food cognoscenti now is to read Bruni's latest review, then head immediately to Langbein's blog to see what she thought about it. Langbein, a raw amateur, is the opinion-maker now.

The Bruni Digest vividly makes the point that restaurant reviews can often tell us very little about a critic's dining experience while telling us way more than we want to know about his or her mindset. Could something like it pop up in your town? At the rate the blogosphere is expanding, we'd say you could expect to see your local newspaper critic's work put under the microscope soon. And if the blogger is half as clever as Langbein, it will stir up plenty of interest in your local dining scene.