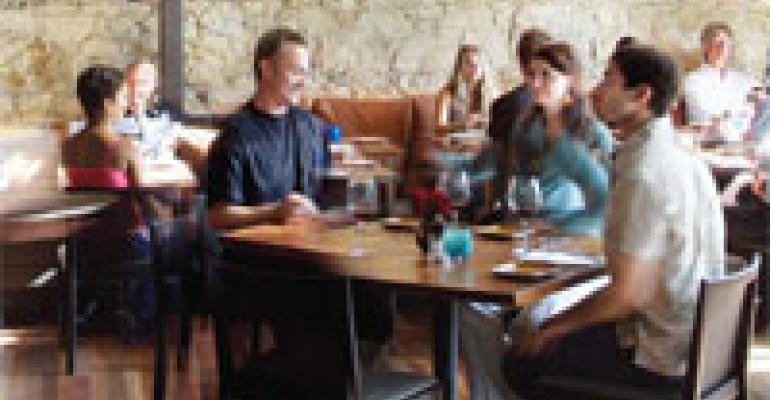 We Know You Might be skeptical of an operation that combines a vegetarian restaurant with a yoga studio. It sounds like one of those old hippie joints where idealism came first and business reality second — until the cash flow dried up.

Well, there's plenty of idealism on display at 11-month-old Ubuntu in Napa, CA. The word itself is Zulu for “humanity toward others,” and there's nonstop adherence to the creeds of community building, sustainability, biodynamic farming, eco-this, green-that and more. It's a strange brew, but it has produced a business that brings in money all day.

No matter what you might think about the Ubuntu concept, you've got to be envious of the customer traffic it generates. Not only does the dining room fill up fast at lunch and dinner, thanks to foodie pilgrims who've read the critical praise that's been heaped upon this restaurant's all-vegetarian fare. The yoga classes held in Ubuntu's upstairs studio — 40 per week, plus specialty workshops on the weekends — provide a dawn-to-dusk stream of customers predisposed to eat and drink after their yoga sessions are finished.

Hard to believe owner Sandy Lawrence thought it up on a whim.

She got that whim while walking down Main Street in Napa following an evening that included an at-home yoga workshop with friends and an unsatisfying search for a post-workshop vegetarian meal in Napa. “We passed this vacant building with a ‘For Lease’ sign and started saying, ‘Wouldn't it be wonderful to have a yoga space and a place for people to gather?”

Sounds naïve, no? Lawrence is anything but. She came to Napa after selling her Miami-based business, International Investment Conferences, to a private equity firm. She cleared enough on the sale to buy a 90-acre property in Napa Valley complete with its own winery, Lion's Run. In her previous life, she ran events for sophisticated clients all around the world. Now she's putting those skills to work at Ubuntu, making sure both its food and yoga instruction adhere to world-class standards, too.

Lawrence sure knows how to hire. For the post of executive chef, Lawrence lured 31-year-old Jeremy Fox away from Michelin-starred Manresa in nearby Los Gatos, CA, where he had been chef de cuisine. Even better, Fox's wife, Deanie Hickox Fox, who was pastry chef at Manresa, signed on at Ubuntu, too.

Also on the team: Jeff Dawson, who curated the gardens at Napa's Copia culinary center. He oversees the biodynamic gardens on Lawrence's property that supply organic produce to Ubuntu.

So how's the food? Fox cooks a strictly vegetarian menu, a challenge when your job is to provide taste thrills to the general dining public. Here's what two of the country's most demanding critics have to say about how well he handles this test.

“Everything Fox produces has perfect pitch,” wrote Michael Bauer in the San Francisco Chronicle, who awarded three stars to the then-three-month-old restaurant. “Most dishes are less than $15 and involve skill rarely found at restaurants that charge twice the price.” He names two of them: The French Laundry and Chez Panisse.

New York Times critic Frank Bruni embarked on a national search early this year to find the country's most exciting new restaurants. Ubuntu ranked No. 2. “Ubuntu is where virtue meets naughty sensuality,” he wrote. “It's the Angelina Jolie of restaurants.” Instead of finding what Bruni dubs “Kumbaya cuisine,” he discovered “inspired, exhilarating cooking of a caliber I couldn't have imagined.”

The buzz around Ubuntu just keeps building. Most recently, Fox, who is not a vegetarian and doesn't do yoga, was named a Food & Wine Best New Chef for 2008.

Lawrence, a yoga enthusiast for the past 15 years, brought the same level of attention to the yoga side of Ubuntu as she did to the restaurant.

Her studio employs 20 instructors who among them teach 40 classes per week, spanning 15 separate yoga disciplines. Want Kundalini or Kripalu? They've got you covered. The weekday regimen is six or seven classes per day. The per-class cost: $18. Weekend offerings are shortened to leave room for special workshops taught by the kind of celebrity instructors who appear on the cover of yoga magazines. July offers a two-day divine purification program led by Sri Dharma Mitta.

Ubuntu is doing so well that Lawrence, who came to Napa to slow down from her previous high-pressure lifestyle, is finding that the life of a restaurateur, even a highly successful one, has its own stresses.

“Owning a restaurant, I wasn't thinking that I was taking on a job,” she tells the San Francisco Chronicle. “I thought I'd stop in once in a while for a meal.” Instead, she's putting in 16-hour days. “Yoga helps,” Lawrence says.

Is there a lesson here for everyone else? Try this formula: Have an original concept that includes an allied business that brings in plenty of traffic, hire top-notch talent, source the best possible ingredients and keep prices moderate. It gives you a couple of ways to succeed — just the ticket in the current economic climate.