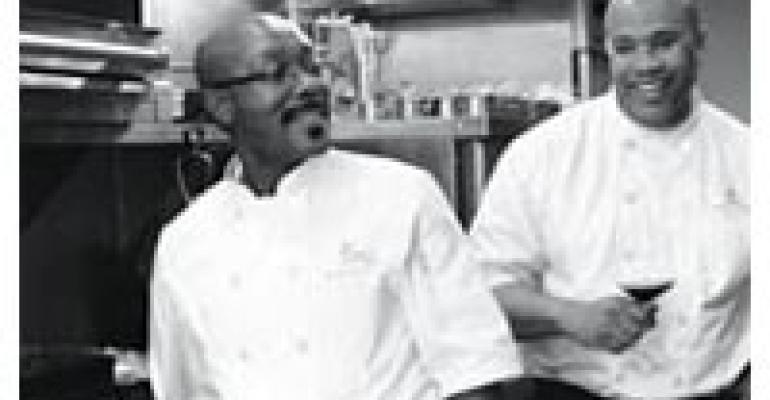 Happy In The Heights

He's cooked all over the U.S. — all over the world, for that matter — but it looks like Robert Gadsby has finally found a place to settle down. It's Houston, which became his personal hub when he served simultaneously as executive chef for Omni Hotel restaurants in Los Angeles, Houston (both called Noè, Gadsby's middle name) and Chicago, piling up frequent flier miles as few chefs have before. Now he's chef/owner at Bedford, which opened in the Houston Heights neighborhood last November.

Guess again if you expected this guy to design an easy-to-execute concept and phone it in from there. Bedford offers an imaginative take on the restaurant business, combining a neighborhood restaurant, fine dining and a sizable banquet area into one operation. It's an approach that can thrive in any economic climate, even the current one.

Great food is a given with Gadsby, who has garnered so much critical acclaim for his culinary accomplishments it's almost superfluous to mention that his early training came in the kitchens of French legends like Joel Robuchon, Alain Ducasse and Alain Chapel. At Bedford, he's going with “cross cultural American cuisine,” which blends French for classicism, Italian for seasonality, Japanese for discipline and American for ingenuity. Add a Texas sensibility and you've got what Gadsby has always produced: food that is distinctly his.

This translates to a seven-item starter set including Chinese Duck Ravioli served with mixed shiitake mushrooms and stir-fried bean sprouts($12). The dozen entrees are split between six fish and crustacean offerings (Telllicherry Peppered Tuna with celery-apple whipped potatoes and endive and citrus BBQ sauce, $26) and six poultry and meat options (Lamb Osso Bucco with melting onions, braised fennel and pomegranates, $26). Hard-core Texas cattlemen can choose the “Cut Your Own Steak” entree, priced by the ounce.

This alone would be enough to make the place successful. But Gadsby is shooting higher here. He wants to draw people into Bedford even when a fine dining occasion isn't called for. To that end, he does a weekday lunch whose 21-item menu features less- challenging fare and lower prices. Sunday brunch is downright reasonable with Oatmeal Porridge, accompanied by breakfast bread pudding and blueberries ($8) and all egg dishes going for $16.

He wants plenty of reception and banquet business, too, which is why the upstairs events space can handle 120 patrons at a time. Other capacities at Bedford are 96 in the main dining room, 80 on the patio and 32 in the bar.

But Gadsby didn't leave himself out, either. He gets to express his creativity for the 10 guests who dine at his Table One on Thursday through Saturday nights. For $150, he prepares a spontaneous seven-course dinner, wines included. It's a blend of what he feels like making and what patrons feel like having. Sometimes guests chefs show up to help — the Food Network's Jeff Henderson is one frequent visitor — or to cook a knockout meal of their own.