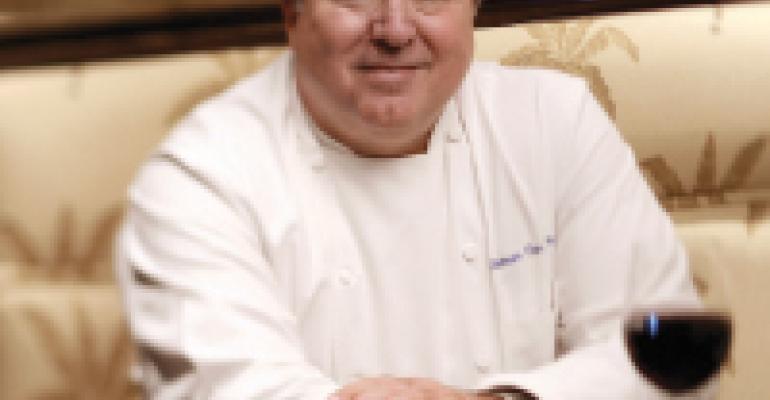 The 56-year-old Van Aken is a native of Illinois and earned his greatest fame while cooking in Coral Gables and Miami. But he began his career in Key West in 1973 (first job: an all-night barbecue spot called The Midget), staying until 1982. It was here that the self-taught Van Aken really learned to cook. He made a temporary return to his home state to become executive chef at Sinclair's in Lake Forest, IL, where his kitchen staff included Charlie Trotter. But it was his return to Key West in 1985 for a chef job at Louie's Backyard that triggered his distinctive approach to cooking.

“That's where I began to form what I came to describe as New World Cuisine,” Van Aken recalls. “I was struck by the American regional cuisines' new-found revitalization in California, New Orleans, the Southwest and New England of that era. In 1986, I began a quest to fully understand the wide variety of ingredients and diverse culinary influences of South Florida, the Americas and the Caribbean region and I started to dedicate myself to respectfully representing South Florida as one of the great culinary destinations of the world.”

South Florida wasn't necessarily thought of that way before Van Aken opened his landmark Coral Gables restaurant, Norman's, in 1995. It is now, thanks in large part to Van Aken's James Beard Best Chef: Southeast award and his subsequent international acclaim.

In 2007, Van Aken closed Norman's and returned to Key West, where his title is creative director and food & beverage partner for Spottswood Hotels. Closed Norman's? His flagship restaurant? Why couldn't Van Aken work out one of those chef-consultant deals where he only had to be in residence a couple of times a year? That's how he works it at his Norman's at the Ritz-Carlton in Orlando.

That approach wouldn't work here. “This project was the biggest of my career from the standpoint of number of outlets,” he told website southflorida.menupages.com. “We operate two restaurants, the pool bar restaurant, room service and banquets for up to 400. I don't think we could have accomplished it by visiting it alone, so moving was necessary.”

He does hold a demanding position. Spottswood isn't well-known outside of Key West, but it owns and/or operates nine resorts in the Florida Keys. They're nice properties, but Beachside is meant to tap into the very high end of the travel market. Among the over-and-beyond amenities offered are a high-profile chef, a fleet of back-up generators to power the place no matter what happens, and the knowledge that this facility was scrupulously constructed with hurricane-resistant building materials.

Hopefully all of this won't be needed for the many Van Aken fans who'll likely make the trip from South Florida down to the Keys to see what this chef is up to. And who wouldn't want to check out the latest incarnation of Van Aken's cuisine, especially when you can experience two distinct versions of it: Tavern's casual fare and Town's fine-dining fare.

The Tavern menu offers tapas, steak and fish house selections and sushi from Japanese chef Sato Honda. Dishes are made in the Tapas Theater Kitchen and delivered tapeo fashion, i.e., items are delivered to the table when they're ready, not en masse.

Van Aken unleashes his creativity on the “first plates section” with new items like seared Maine sea scallops with cauliflower gratin ($18) and a few staples from earlier in his career, like his yucca stuffed crispy shrimp with habanero tartar salsa and Nicaraguan beet salad ($16.50). Main plates include his signature Pork Havana ($32)

Alternatively, guests may pick from a list of 11 protein items and have them braised, wood-grilled or dropped onto a plancha, Spanish style.

Collectively, the range of offerings is breathtaking, as is the thought of ensuring that it all comes out exactly as envisioned. But even so, we're sure many in the food world will make the trek to Key West for a little r and r and a few meals, or more, at Tavern N Town. The Beachside may not be paradise, but with Van Aken doing the food, it's close.