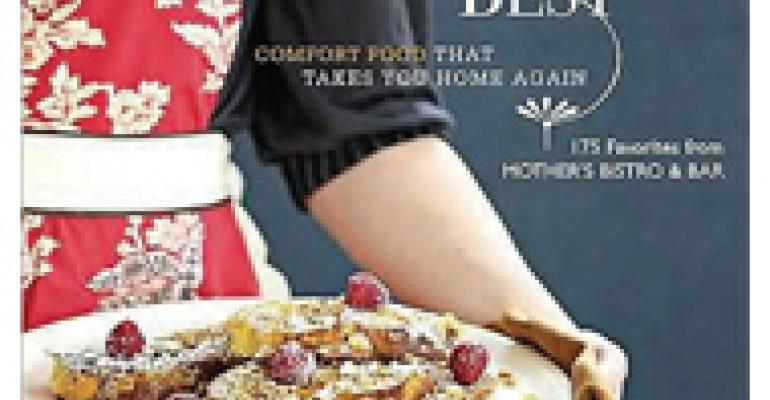 Chefs typically learn to cook at their mother's or grandmother's knee, yet abandon homestyle food as they progress through culinary school and move into professional kitchens. Lisa Schroeder didn't, embracing it full bore instead at her Mother's Bistro & Bar in Portland, OR. Now she's sharing the lessons learned during her 10-year run there in Mother's Best: Comfort Food That Takes You Home Again (Taunton Press, $28). Its contents: recipes that elevate homey cuisine to meet serious restaurant standards.

So if you're looking for envelope-pushing cuisine, you won't find it here; no envelopes are pushed. But before dismissing this book, be aware that Schroeder's approach has been so successful that she's leveraged it to open a second restaurant, Mama Mia Trattoria, next door to the 70-seat Mother's Bistro. That's a lot of success to have in a food-savvy town like Portland.

How'd she pull it off? In addition to her cooking skills and the fine recipes she offers here, Schroeder also managed to identify an unmet need a million other operators had overlooked. As she told Restaurant Hospitality in a 2004 interview, she had an innate sense that the market for well-prepared grandma food could be huge.

“I knew it would appeal to almost every age group” she noted then. “Older people would love it because it's the food of their past. Younger people would eat it out of chicken nugget backlash. It's what they wish their parents would have made them. And if it's really good food, in a somewhat hip, and not-too-grandmotherly environment, I knew it would be universally loved.”

And for the most part, it is. Her book offers 150 recipes in all. Most of them are what you'd expect: can't-miss family segment dining staples like meatloaf, chicken and dumplings, plus plenty of braises and stews. Much of Schroeder's food is as old school as it gets, but her versions elicit the kind of “wow, you can't find food like this anymore” reaction that keeps customers coming back.

One way Schroeder keeps her menu fresh is by featuring a “Mother of the Month” program at Mother's Bistro. Each visiting mom brings a handful of prized recipes that reflect her personal food heritage; often it's that of a foreign country or overlooked region of the U.S. Schroeder helps the guest mom make it all restaurant-quality and many of the best items are detailed here.

If the tasty food this book produces isn't enough, be further aware that most of these dishes rely on lower-cost ingredients, especially the proteins. If you're looking to add menu items whose inherent food costs are tailor-made for the economic times, Mother's Best will help you find them.