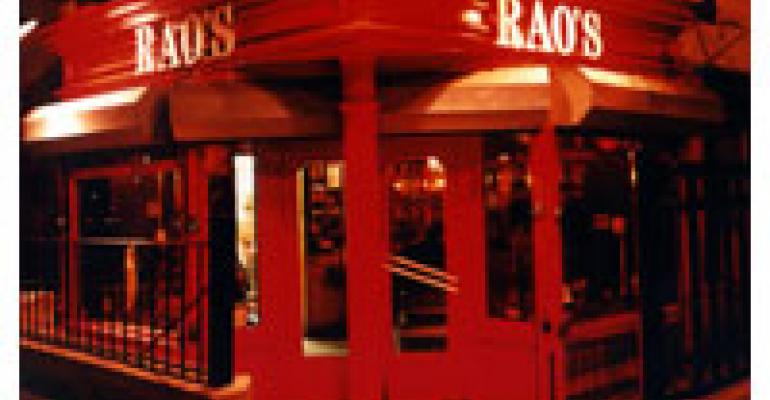 Put Your Reservations, At Least the Best Ones, on eBay

Here’s another spin on restaurant reservation revenue optimization—the same process the airlines call yield management. It’s from the impossible-to-get-into Rao’s in Manhattan. The restaurant has successfully listed and sold a reservation for a table for four on eBay, with an opening bid of $5,000. This move demonstrates just one of the ways an online auction platform could enable restaurant owners to get a greater return on their most desirable reservations.

Two weeks ago, we wrote about chef Grant Achatz’s groundbreaking plan to charge different fees at different times at his new Chicago restaurant, Next. Now Rao’s is waking up to the fact that a tough-ticket reservation can have great value in the marketplace.

With only 10 tables—all of them held virtually condominium-style by a small crowd of New York City insiders—and only one sitting per night, Rao’s is the city’s most elusive reservation. They don’t even try to be nice about it when innocent reservation-seekers call. Here’s the message table-seekers get when they phone to inquire: “As of the moment, 2010 is completely filled and we are not accepting any reservations. Thank for calling and have a very happy new year.”

Which, of course, makes people all the more desirous of getting in. Sure, they could head to Las Vegas and visit the Rao’s Caesars Palace. There’s plenty of room at that one, with twin 10-table replicas of the New York original plus additional seating in the “feast area” plus dining on the outdoor patio. But the Las Vegas experience just isn’t the same, lacking the exclusivity of the New York flagship.

So when it came time for to raise money for the National Italian American Foundation, what better way than to put a table for four at Rao’s up on eBay and see what the market would bear. The price of the reservation included all food, house wine and taxes, and the opening bid was $5,000. Anyone who wanted to skip the auction could choose the “Buy It Now” option for $20,000. The reservation was for July 27, a Tuesday, and could not be switched to another day. No exceptions.

How’d the auction go? There was just one bid: the minimum, $5,000. No doubt Rao’s expected more bidding action, but we still think the eBay approach has merit. It could work both as a platform for marking up a restaurant’s hard-to-get reservations on particularly busy nights or as a relatively painless way to make charitable donations.

It took a long time for the airline industry to iron out the kinks in its yield management systems, and restaurant operators are just at the very beginning of figuring out how to do something similar. Achatz is going all in, building his own reservation system and having customers buy “tickets” (i.e., prepay for meals) to his restaurant. The Rao’s approach is showing other operators how to do something similar on a more selective basis. The eBay platform seems like a natural for entry-level reservation revenue optimization experiments. We hope some other restaurants give it a try soon.