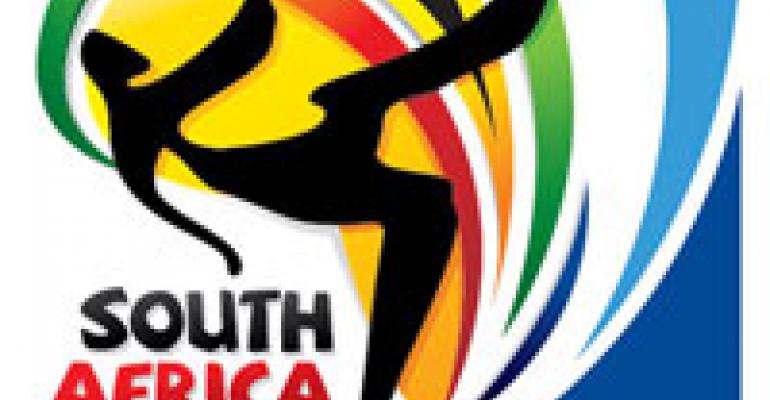 Restaurants elsewhere in the world are more than ready to cash in on the upcoming 2010 FIFA World Cup soccer championship in South Africa, a sporting event of global magnitude that trumps even the Olympics. But in the U.S.? Not so much, even though there might be more soccer-related business to be had here than many operators imagine. It’s not too late to get in on the action.

How? There are plenty of ways to play the 2010 FIFA World Cup from a promotional perspective.

The easiest: If your local community is home to an ethnic group with ties to one of the 32 nations participating in the tournament, your work is done. Just come up with some food and drink specials that would be meaningful to this country’s natives and get ready to do some furious business.

If no such ethnic group lives near your restaurant, opt for the next-easiest option: cater to the Americans. Take your cue from Chicago’s Rockit Bar & Grill, which has made itself the “official Budweiser home for U.S. Soccer” during the World Cup.

It’s a simple promo. Rockit Bar & Grill will offer U.S. Soccer giveaways and provide plenty of drink specials to choose from. The most important thing: it provides U.S. soccer fans a place to gather and get crazy. Think this will make the cash register ring during what would otherwise be a slow Saturday afternoon? We do, too.

Almost any restaurant with a bar and a flat panel TV could do much the same. Keep in mind that any promotion you come up will be more than a one-shot deal. All 32 teams entered in the tournament play at least three games spread out over two weeks, with the teams that win advancing to play for as long as (if they make the finals) one full month.

How big an opportunity is this? Consider what the marketing whizzes at McDonald’s have going. This chain knows a good opportunity when it sees one, even though McDonald’s doesn’t sell alcohol, its menu is engraved in stone and the units don’t have TVs for viewing the games. For the fifth time—i.e., for the past 20 years—McDonald’s is a World Cup sponsor and the event’s official restaurant. So you know the company is getting a worthwhile return on its marketing investment.

“We’re committed to providing our customers with numerous ways to participate in the excitement and passion of FIFA World Cup South Africa,” says Bridget Coffing, McDonald’s global vp of marketing communications. “From specially-themed menu items, packaging and restaurant promotions to innovative digital activities, community youth clinics and team sponsorships, our goal is to connect our customers like never before with FIFA World Cup.”

We can only hope that McDonald’s innovative digital activities are as clever as the ones dreamt up by Twitter-based Tweservation. Never heard of Tweservation? This service enables customers to contact restaurants and book a table via Twitter and receive immediate confirmation via their mobile device.

In its home base of San Francisco, the company is sponsoring a contest for registered users that encourages them to try a dish from each of the 32 countries playing in the World Cup. To participate, users first download an iPhone app. Then they go to www.foodspotting.com/guides/143 to find pictures of all 32 dishes and the names and locations of the San Francisco-area restaurants that produce them. Participants then visit the restaurant and try the dish, clicking the app’s “spot it” feature to document their visit and adding their personal snapshot of it as proof.

The first player to spot all 32 items wins (remarkably, someone already has done so). He or she gets a $100 gift certificate to any of the restaurants on Tweservation’s website. The next two finishers get, respectively, a $50 and $25 gift certificate. More than 100 registered users had signed up to participate early on.

So are there really enough soccer fans in the U.S. to make a World Cup-themed promotion worth your while? It’s true that soccer, a national passion in almost every country in the world except the U.S., hasn’t caught on here like its backers would hope. But we would point out that in terms of tickets sold to the 2010 FIFA World Cup, South Africa is No. 1, but the U.S. is a surprising No. 2. Some operators are going to make a bundle of money by figuring out how to tap into this growing interest. We hope one of them is you.