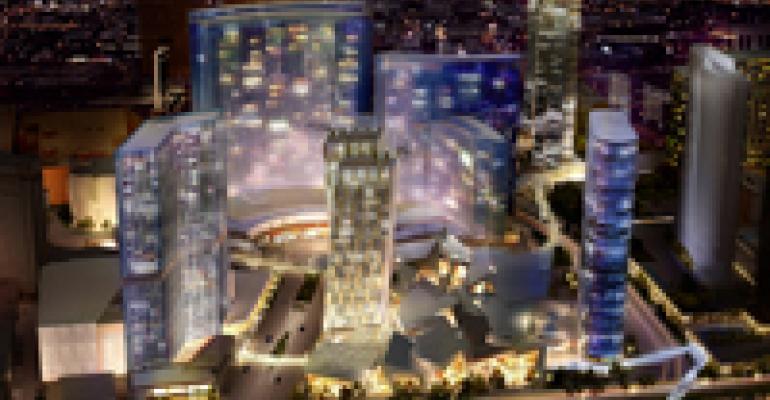 Twilight of the Absentee Chefs

Construction gurus are predicting that once a handful of big projects now under development on the Las Vegas Strip are completed by 2010, there won’t be anything else built for a decade. That means the ever-expanding supply of high-level and high-paying restaurant jobs there will soon come to a screeching halt. Whether you’re a celebrity chef interested in opening a place of your own in Vegas or an aspiring culinarian looking to build your skills and resume in a hurry while earning good bucks, you’d better make your move soon if you’re going to make it at all. May we suggest you apply at Aria?

If you think your restaurant is suffering from the triple whammy of soaring food prices, growing labor costs, and out-of-control energy prices, imagine what they’re up against in Las Vegas. They have 125,000 hotel rooms, thousands of restaurants and dozens of casinos that all depend on a perpetual stream of free-spending tourists and conventioneers. It’s been tough sledding this year, and it’s about to get even tougher as the economy seemingly sinks even further and faster.

People are still coming to Las Vegas—occupancy rates were down just one percent in July, thanks to heavy discounting and comping—but they aren’t gambling as much. Revenue at casinos fell 6.5 percent in the same month. “People still have Las Vegas as their destination of choice, but their budget is less,” Jan Jones, senior v.p. of Harrah’s, told Reuters. “There is no question that people are spending less money now,” added MGM president/c.o.o. Jim Murren.

Also feeling the heat are hotel builder/developers. They had already seen the real estate boom come to end before the current financial troubles hit. Now they face the further problem of being unable to borrow money to start or complete new projects. When you read about the credit markets freezing up, these are the types of projects that get mothballed or cancelled.

But funding shouldn’t be a problem for CityCenter, a $9 billion complex set on 67 acres between the Bellagio and the Monte Carlo. It’s a 50-50 joint venture backed by MGM Mirage and Dubai World. The centerpiece of this project is Aria, a 61-story, 4,000 room gaming resort that will have a stellar lineup of restaurants. The complex will also include three non-gaming hotels (a Mandarin Oriental; the Harmon Hotel, Spa & Residences; and Vdara Condo Hotel); Veer Towers, the only strictly residential building; 2,600 condominium residences; and the Crystals, a 500,000-sq.-ft retail entertainment district. The developers are calling the whole works a “vertical city.”

CityCenter scored a major coup by convincing Masayoshi Takayama, chef, owner and sushi master of Masa in the Time Warner Center in New York City (shown), to open a place in Las Vegas. He’s the last guy you’d think would succumb to the lure. Masa provides a refined aesthetic experience in New York that’s highly personalized by chef Masa himself. Guests at his elegant-yet-understated restaurant pay top dollar ($400 prix fixe, tip, tax and beverages not included) for a three-hour or more omakase tasting experience usually overseen by the master himself. It’s a sanctuary of Japanese fine dining.

Still, even at $400 a head, it’s tough to make a bundle with only 26 seats anywhere, let alone in the high-rent district of Manhattan. No wonder Las Vegas looked good to Masa. At Aria, his Bar Masa will encompass two different styles of service and cuisine. Bar Masa proper will be relatively casual, and guests will order off an a la carte menu featuring the chef’s take on modern Japanese cuisine. A second option, Shaboo, located with Bar Masa, has been designed to give an exclusive dining experience similar in ways to that of Masa NYC. The menu will change and feature the best seasonally available products, and each table will have it own induction cooking element. Interestingly, while Masa NYC is primarily a sushi dining experience, they’re not making that commitment for Bar Masa at Aria. No word on how frequently chef Masa will be onsite.

The last time we interviewed chef Shawn McClain, he was still commuting from his home to his restaurants on a bike. Now the proprietor of Chicago standouts Spring, Green and Custom House has joined the jet set and will open a restaurant called Sage at Aria. He says he’ll be offering farm-to-table produce, artisanal meats and sustainable seafood in a dining room that will be informal, yet sophisticated and comfortable. He’ll still cook with the refined, understated sensibility he uses in Chicago. As is true of chef Masa, when guys like this can be lured to Las Vegas, the talent recruiters there have gone about as far as they can go.

The remainder of Aria’s cooking lineup consists of talented, indeed legendary, chefs who have gone the Vegas route before, some of them multiple times. Five already have restaurants somewhere in CityCenter partner MGM Mirage’s Mirage casino/hotel operations. We can guess how well those restaurants have done by noting that these chefs have been asked to set up shop directly next door to their current venues. Note that each of their restaurants has a new name, if not a dramatically new concept, at Aria.

Julian Serrano, an early arrival in Las Vegas, has racked up plenty of honors at Picasso in the Bellagio. He’ll head up the eponymous Julian Serrano at Aria, a more casual restaurant that will offer various menus at different price points. Chef Serrano says the cuisine will be drawn from his native Spain. He’s looking to stretch the usual boundaries of small plate fare by incorporating traditional and innovative interpretations of Spanish cuisine.

Jean Georges Steakhouse at Aria will see chef Jean-Georges Vongerichten expand his usual steakhouse approach to include a much bigger bar scene. Sirio’s will be Aria’s Italian offering, It’s from restaurateur Sirio Maccioni of Le Cirque and Circo in New York and Las Vegas.

One thing all these restaurants have in common is that they mostly appeal to a middle-aged and older crowd. Which may be why Aria’s owners turned to the chef Brian Massie and the Light Group to pump a little life into the place. Their unnamed restaurant will feature what’s billed as an edgy American dim sum menu. It’s a way to get small, sharable plates into the hands of those who don’t want ethnic foods all the time. The Light Group is the firm behind some of Las Vegas’s hottest nightclubs, lounges and restaurants, with The Bank nightclub at the Bellagio and Diablo’s Cantina at the Monte Carlo being their latest ventures.

CityCenter is due to open late in 2009. Prior to that Wynn Resorts Encore (opening this December) Boyd’s Gaming’s $4.8 billion Echelon, the Fontainebleau Las Vegas and a new hotel tower at Caesars are coming on line over the next couple of years. That could be the end of hotel construction for a decade, Las Vegas insiders say.

So if you want to take your chances on getting a job to what may well be the culinary capital of America, at least in terms of big name chefs and fine dining revenue, do so soon. The end of the big-ticket cuisine boom in Las Vegas may be, temporarily, in sight.