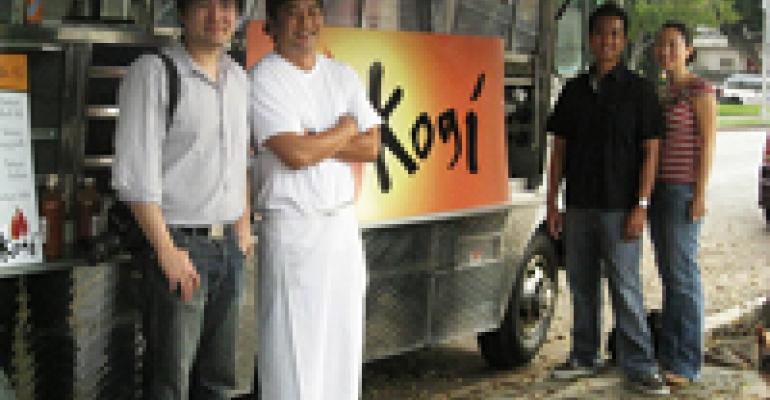 Still figuring out if or how or you can leverage social media to benefit your restaurant? A handful of operators already has it figured out, drastically lowering their cost of entry into the business and keeping overhead to a once-unthinkable minimum. All it takes to get started is a food truck and a cadre of fans who use Twitter and other social networking tools to hype your food and update the world on your restaurant’s ever-shifting location. If you’re looking for a restaurant segment that would allow you to spend less and earn more, this approach might be for you.

The current superstar of what we’ll call the itinerant dining segment is Kogi, a two-truck operation that does business from various locations across Los Angeles. L.A. had plenty of taco trucks before Kogi arrived, but it had a new slant on the taco business. Its point of differentiation: an irresistible blend of Korean and Mexican items—Korean BBQ tacos, for example—that are creating a new standard for street food in the U.S. Their offerings are tasty enough, and the free publicity generated by the Twitter viral enough, that Kogi has already generated a serious amount of national publicity (Newsweek, the New York Times, PBS) without lifting a finger. Its perpetually texting customer base has spread the word for them.

The stripped-down business model here is a thing of beauty. Kogi’s 15 cooks prepare food in a Culver City commissary and load it onto the operation’s two trucks. Those vehicles then hit the road. Days might find the trucks in an office-rich part of town where workers crave a hip, affordable lunch. Evenings are spent at spots that attract a supper-seeking clientele. Late night sees the rigs head for neighborhoods that harbor a rockin’ nightlife, complete with hungry clubgoers who chow down well into the night.

Kogi trucks rotate their locations during the week, going to the same spot no more than once or twice. Whenever a truck pulls in, it’s typically greeted by waiting lines of Twitter-alerted fans, creating a sense of event rare for this kind of dining.

Or at least they didn’t before Twitter and other social media began to catch on. Kogi lists its likely locations and serving hours on its website (www.kogibbq.com), of course, but it’s the 9,000 people who follow Kogi on Twitter who really keep potential patrons up to date on the trucks’ current locations. Communicating via 140-character real-time “tweets,” Kogi followers always know what’s up and where.

Right now, it’s a great meal and a flash scene all in one wherever the Kogi truck sets up shop. Other food trucks have previously shown the merits of parts of this business model, but Kogi is the first to combine the publicity power of social networks with innovative food.

The general idea behind Kogi’s menu is to take the taste of Korean BBQ and package it in tacos and burritos for easy portability by the customer base. The primary taco options include the signature Korean short ribs, BBQ chicken, spicy pork and a tofu version. All tacos are topped with some sesame chili salsa roja; julienne romaine lettuce and cabbage tossed in Korean chili-soy vinaigrette; cilantro-green onion-lime relish; and crushed sesame seeds and sea salt. Each is garnished with a lime wedge, orange wedge and red radish wedge. It’s good-looking, good-tasting food.

The cost? $2 per taco. Drinks—canned soda, etc—go for $2 each also. Well-stuffed burritos featuring the four taco-filling options are $5. Kogi has recently expanded its menu to include kimchi quesadillas and pork-belly tortas at higher price points.

While Kogi sounds like an idea some wacky kids dreamed up, the team behind it has solid food-world credentials.

Founders Mark Manguera and Caroline Shin-Manguera both worked as f&b mangers at big hotels in L.A. before founding Kogi. Chef Roy Choi graduated first in his class from the Culinary Institute of America and has worked at Le Bernardin in New York City and other top kitchens around the world. His last job before Kogi: opening Rock Sugar Pan Asian Kitchen in Century City, the new concept from The Cheesecake Factory that we profiled back in the Oct. 2008 issue of Restaurant Hospitality.

Just as importantly, Kogi has a high energy New Media department. We like how they describe its principals on their website:

“Mike Prasad is the Brand Director and New Media Consultant. Mike is responsible for giving Kogi a name, a look, and a twitter. He focuses on building Kogi’s presence, presentation and culture not only on the streets but also online in the social media world utilizing tools like Twitter, Qik, and other coolness.

“Working along side Mike, Andrew Seely is part of the New Media team. He’s always finding new and exciting ways of getting the brand out there for people to enjoy. He can often be found hanging around the truck brainstorming up the latest and greatest ideas for how to get Kogi mentioned on blogs, in newspapers and other forms of media, both traditional and new.”

Two guys working on new media? Seem like a lot of personnel overhead for a tiny taco truck operation, doesn’t it? It is, but Kogi’s not laying out any cash for a bricks-and-mortar location or traditional marketing, either, and its operating model sidesteps several other costly aspects of restaurant operation.

Right now, Kogi’s like a machine. It has already has taken over the kitchen at L.A.’s hip Alibi Room nightclub and created a nonmobile version of its operation there. The company plans to deploy trucks in big cities up and down the California coast, and we expect imitators to pop up soon.

So would something like this work for you? It well might, but keep in mind that L.A had plenty of taco trucks before Kogi showed up and the laws and protocol that enable them to run smoothly have been in place a long time. Just as importantly, customers were already used to buying meals from these mobile vendors. L.A. also has consistent good weather that’s amenable to outdoor eating all year long; your town may not be so lucky.

But a seasonal version might work in cold weather cities. If you get the food part right, the power of social media will do a lot of the other heavy lifting for you. The Kogi people started with just $3,500 and a borrowed truck, and look at them now.

Choi is sure sold on the whole deal. “I can cook for 100 people a night,” he tells Newsweek about his previous experiences in getting recognition for a restaurant. “But Twitter can hit 5,000 people a second. It’s word-of-mouth times a million.” If that Twitter-driven word of mouth about the operation you come up with is as positive as Kogi’s, we don’t see how you can lose.

This week's top 10: A disaster expert on preparing for a second wave, the restaurant players who got PPP loans, Chef Kwame Onwuachi leaves Kith/Kin
Jul 09, 2020