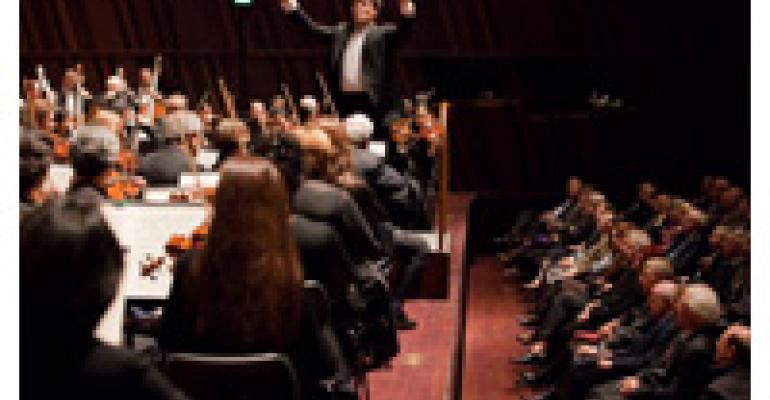 Tune Up Your Late-night Daypart

Nightclubs remain the default choice for post-concert partying, but chefs and restaurants are getting smart about grabbing their share of this lucrative late-night business. New York symphony goers can now pay $225 per head to have a meal prepared by a legendary chef as soon as the performance lets out. Is there a way your restaurant could get in on the action?
The highbrows who flock to New York Philharmonic concerts at Lincoln Center have at least one thing in common with the headbangers who follow thrash-metal bands and the boomer-era stoners who support over-the-hill arena rock acts: they’re looking for something to do once the music stops. Some, to be sure, prefer to go straight home after a concert. But many are looking for something to eat and/or drink nearby as soon as the event lets out. Smart operators are figuring out how to lure them to their restaurants. It’s sporadic business, but really delivers a crowd when done right.
Consider the New York Philharmonic’s approach. This year, it’s offering a lineup of four renowned chefs, who will each prepare a meal that will be served at Arpeggio Food and Wine inside Lincoln Center’s Avery Fisher Hall. Capacity is 70 guests, and only those who have tickets for the evening’s concert are eligible to attend the post-show suppers.

Former New York Times food critic Mimi Sheraton hosts these events. She introduces the chef and discusses each menu before the guests are served their meal. Also on hand for the festivities are Philharmonic musicians and the evening’s guest artists, along with Philharmonic president Zarin Mehta and music director Alan Gilbert. If you’re a fan of classical music, this is as good as events can get.

Especially when you consider the caliber of chefs doing the cooking. The series kicked off on Jan. 7 with a rare opportunity to eat the food of Andre Soltner, chef-owner of New York City’s seminal Lutèce. Next up, on Jan. 28, is a meal prepared by Alain Ducasse, man of many Michelin stars whose most recent New York City venture is Adour Alain Ducasse in the St. Regis New York. Marcus Samuelsson, who has just opened his new Red Rooster in Harlem, will be behind the stoves on May 6. Closing out the offerings on June 10 is chef Michael White of NYC standout Marea as well as two brand new Italian restaurants, Ai Fiori and Osteria Morini.

It all sets up the opportunity for a matchless evening of dining and concert-going in New York City. Ambitious patrons will be able to dine pre-show at the stunning new Lincoln, catch the New York Philharmonic, then have a late supper provided by a legendary chef, complete with a meet-and-greet with the chef and the symphony performers. A pricey evening, yes, but where else in the world could you get something like it?

This is how you attract the after-party demographic in the classical music market. And there’s an opportunity for restaurants located near rock, country or other music venues to come up with and market something in the same vein. People out for a night on the town often aren’t done spending when the music stops. Try giving them something tailored to their needs to spend it on and we’ll bet they’ll come, and they’ll want a lot more than a nightcap.