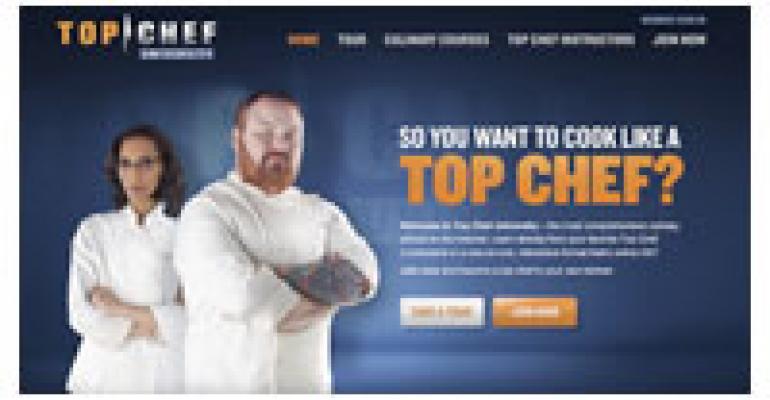 Can’t pay the $12,180-per-semester tuition at the CIA? No problem. Now you can get an entire year’s worth of culinary education for $199.95 from TCU—that’s Top Chef University, the latest spin-off venture from Bravo’s Top Chef cable TV franchise. No room and board charges, either.

Top Chef University (TCU) is an online cooking school run under the aegis of the popular Bravo show. It can’t begin to touch the depth of information and hands-on instruction you’d get at the Culinary Institute of America or a similar residential culinary school. But for its price and high level of convenience, TCU might be worth a look for those interested in beginning or advancing their restaurant careers.

Those are the positives. On the other hand, it’s a made-up school that doesn’t give students credits or degrees. In that sense, it’s like Trump University (“We teach success”), an online real estate and deal-making school that was also spun off from a successful TV series (The Apprentice). Trump University (current rating by the Better Business Bureau: D-) has given the genre a bad name. But TCU might be worth a look. Completing the TCU course of study might not get a student a job whose description reads “culinary degree required.” But it would at least demonstrate that the student is serious about learning more about cooking; that alone might suffice to get someone a shot.

TCU bills itself as “the most comprehensive culinary school on the Internet,” which it well might be. But so what? Our quick survey of similar online schools led us to the conclusion that a professional cooking education might be something better acquired in person than online. On the other hand, because TCU is so convenient—students can call up any of the available courses 24/7—that in part might make up for the lack of hands-on cooking.

TCU’s key selling point is its faculty. Each of its 11 instructors is a former Top Chef contestant. Many of the teachers are fan favorites who won the show or at least came close (Stephanie Izard, Kevin Gillespie, Carla Hall). Also on board are avant-garde culinarians Marcel Vigneron and Richard Blais.

To access lessons, students can pay tuition of $24.95, which entitles them to take one new course per month. Alternatively, students can enroll for an annual $199.95 tuition fee and gain access to the entire curriculum. There are tests along the way, report cards are issued (it’s not clear how the instructors will know how the items the students cook taste, smell and look) and students can earn “Top Chef” certification when they complete their course of study.

The school is run by Post Oak Productions, whose website describes its expertise as the ability to “take your existing brands and engineer ways to leverage them into entertaining and educational consumer training products.” TCU’s culinary director is chef Anthony Hoy Fong, who previously was culinary director for Tyler Florence. (Hey, why does Tyler Florence, a highly capable chef, even need a culinary director?). Top Chef judge Gail Simmons is also involved in the school.

Post Oak’s other TV-related school is WSOP (World Series of Poker ) Academy, which offers interactive instructional camps led by top players who have appeared on the WSOP’s televised tournaments. It recently offered a three-day instruction session with poker player Annie Duke. Look for in-person events from the TCU if its online presence is a success.

You’ll have to decide for yourself if TCU is a good use of your money and time, or whether it would make a good training tool for your restaurant. But we would offer one cautionary note. Be sure to read the school’s forbidding Terms of Service agreement (www.topchefuniversity.com/page/terms) agreement before signing up.