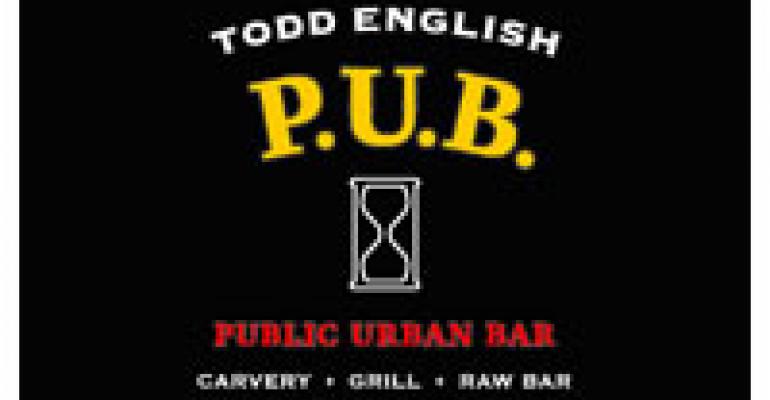 Here’s one to try the next time you’re playing foodie trivia with your friends: “Name the only Beard Award-winning chef to offer permanent chug-a-lug games in his namesake restaurant’s bar?” The answer: Todd English, at his just-opened Todd English P.U.B. in Las Vegas. Best of all—or perhaps worst of all—patrons who can drink fast enough get their beer for free.

English is a terrific chef who was smart enough to put his new P.U.B. (an acronym for Public Urban Bar) in a can’t-miss location. It’s situated on the edge of Crystals, the Studio Daniel Libeskind-designed retail complex that’s part of the massive new CityCenter development. Guests from the 4004-room Aria Resort & Casino have to walk past it to get to shopping and other restaurants, and the other huge hotels and residences within CityCenter are just steps away. In terms of foot traffic made up of people willing and eager to spend money, it doesn’t get any better than this.

Which makes this restaurant seem like the last place in the world that would need a gimmick to draw customers. Yet P.U.B. has one that seems…well, we’ll just let the P.U.B. PR release we received provide the description:

“The fun begins at the top of the bar, equipped with signature Todd English hourglasses that encase only seven seconds of sand. Down a draught in seven seconds, and the pint is on the house. Guests can challenge their neighbors at the bar to the hourglass drinking game.”

Patrons can further test their alcohol tolerance on one of the restaurant’s several beer pong tables. Participants will have their choice of more than 50 international bottle, keg and cask beers available at the bar.

But it’s meant to be a celebrity chef-driven gastropub, not a bar, and it’s interesting to see how someone with English’s culinary and business skills approaches the genre.

“I wanted a menu that would match our exciting atmosphere,” English says. “By featuring a variety of upscale appetizers at an affordable price, alongside our signature Carvery and Raw Bar, there is something for everyone’s taste at Todd English P.U.B.”

The Carvery features rotisserie-cooked meats (prime beef, roasted chicken or duck, brisket, leg of lamb) served in half- or full-pound portions. The idea is that customers can create a “deconstructed” sandwich by choosing a meat, then make selections from an array of artisan breads and a sauce lineup that ranges from pineapple mint jelly all the way to black truffle mayonnaise.

As its name suggests, the Raw Bar offers a bevy of chilled oysters, shrimp, lobster and stone crabs. The rest of the food emanates from an open-view “show kitchen.” Mainstream pub items are the highlight, including such staples as bangers & mash, fish & chips and something called a Grichebecktom, which English describes as “the workman’s cheese sandwich with creamy brie cheese and double-smoked bacon.” Other featured items include several varieties of fries, grilled soft pretzels, dirty chips (menu description: “kettle chips with bacon bits, scallions, blue cheese dressing and chicken liver”) and cured salmon with potato pancakes.

“I look forward to helping locals and tourists alike enjoy a unique pub experience, one pint at a time,” says English. The lesson here for other operators: In gastropubs, you make your money off the bar, more so than the food. You might as well emphasize it from the get-go. We’re not so sure about the drinking game aspect of this operation, although it certainly sets a tone. But the rest of it seems like a worthy model to investigate for others who want to cash in on the gastropub trend.