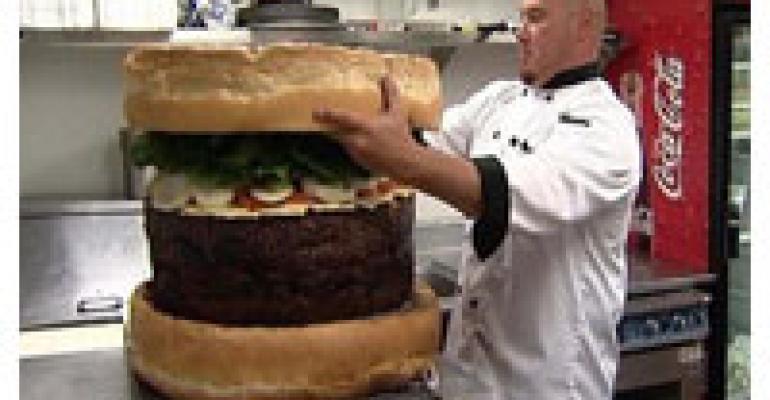 They’ve Got the Beef

Do you get full eating a quarter pound hamburger? If so, you should probably stay away from the new burger at Mallie’s Sports Bar & Grill in Southgate, MI. The suburban Detroit restaurant believes it recently broke the world’s record for “the largest commercially available” burger.

How big? We’re talking 134-pounds big. Gives you indigestion just thinking about it. Owner Steve Mallie says it took 12 hours to make the burger, and took three men using two steel sheets to flip it over and other fixings. The crazy thing is, you can order the damn thing, as long as you give the restaurant 24-hours notice and fork over $350 bucks.

If you’ve got the will to tackle the behemoth, bring along some friends. A group of 30 guys reportedly tried to take it on, but barely put a dent in it, says Mallie. The world’s record has not yet been authenticated, though it clearly outweighs the 123-pounder made last year by Denny’s Beer Barrel Pub in Clearfield, PA.