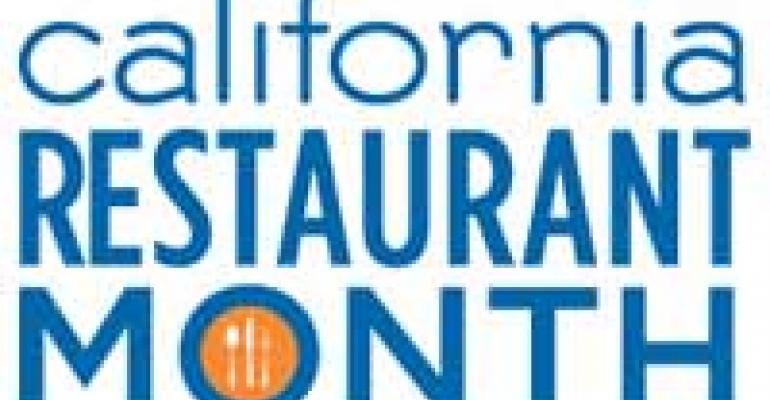 We already know nothing beats “Restaurant Week” promotions for filling seats during slow periods. Now the California Travel and Tourism Commission is taking the concept one step further. This January, it’s bundling 20 different restaurant weeks from locales around the state into one big package and promoting the whole works as “California Restaurant Month.” The idea is to promote tourism; we think the added exposure will help any restaurant that participates.

The first restaurant week took place in New York City in 1992, when the price of a three-course meal was $19.92. The lunch-only promotion was offered during the summer, a slow period on the usually hectic New York City restaurant scene.

The concept has spread like wildfire since. Restaurant operators across the country have embraced the idea of offering prix fixe meals at bargain prices in exchange for revenue boosts due to higher volume, plus increased exposure for their city’s overall dining scene. Today, even in the era of Groupon and other digitally driven deals, the concept remains strong, as operators find restaurant week a powerful tool to keep their dining rooms busy when they otherwise wouldn’t be. Restaurant weeks remain popular because participation nets out as a win in most cases. (See “The Genius of Restaurant Week”)

To date, restaurant weeks have been organized and promoted on a city-by-city basis. That’s how they’re going to do it in various locations across California this coming January, too. But now the state’s tourism boosters are pitching in to bundle these local events into something even bigger: California Restaurant Month.

A few participating California cities and areas will be offering month-long promotions, but most will stick with the traditional single week. Each stands to attract extra customers thanks to the bonus publicity provided by the state.

“California Restaurant Month is a great opportunity for foodies—and those who aspire to be—to experience the best of California’s abundant and diverse wine and food products,” says Caroline Beteta, CTTC president and c.e.o. “Visitors can save up to 25 percent on meals at some of the best restaurants in more than 20 destinations across the state, from mountain and coastal regions to urban and wine country hotspots.”

Who’s participating? The culinary capitals (San Francisco, Napa Valley, Los Angeles, San Diego, Napa Valley) have all signed up. But so have lesser-known destinations such as Fresno, Irvine, Oxnard and Temecula Valley. Even restaurant nirvana Yountville is on board. All weeks are scheduled in January, but are staggered so as to create, more or less, a full month’s worth of prix fixe deals for customers who are willing to travel.

We can’t think why this idea wouldn’t work almost anywhere else in the country. Every state has some sort of group or commission that’s charged with boosting tourism within its boundaries, and these entities usually have generous budgets. We suggest having your local or state restaurant association contact your state tourism authority pronto to get the ball rolling.

You may even wish to contact your state senator or state representative to have them lobby the commission on the restaurant industry’s behalf. Maybe they could even tuck a small item into the state budget to specifically fund such an effort. Given the power agricultural interests are often able to exert over state legislatures, maybe timing a state-promoted restaurant month so that it showcases certain crops could help build consensus and ensure promotional funding.

A statewide restaurant month sounds like a great way to encourage more business in full-service restaurants. Let’s hope there are many more in place by this time next year.