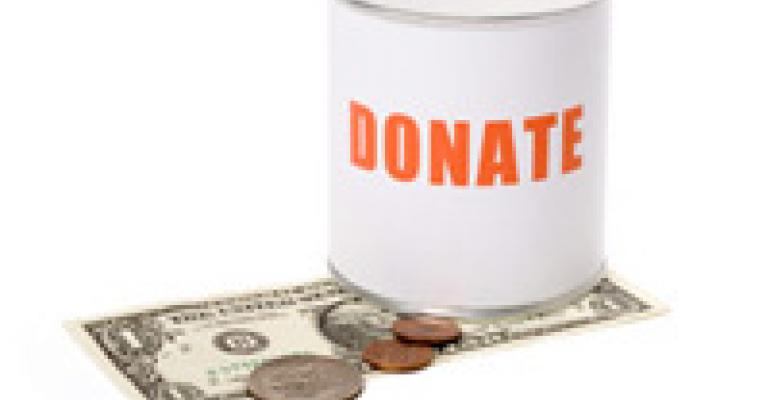 How does celebrity chef Michael Chiarello handle nonstop requests from well-meaning fundraisers? He used to say “yes” to many of them, and he still will. But now the charity event will have to take place in his restaurant, and he wants to be guaranteed his usual take per customer—$60 per head. Think a lot of his fellow chef/restaurateurs will soon adopt this common-sense approach?

Chefs and restaurateurs at every level are bombarded by requests from worthy charities, but imagine what it’s like for a high-profile guy like Chiarello. He’s got a couple of TV shows, his vast NapaStyle retail empire, a fine new restaurant (Bottega in Yountville, CA) and even his own vineyard. “Every day I’m in the restaurant, literally every single day, somebody asks for my help in fundraising,” he wrote in a recent post on Inside Scoop SF.

Chiarello finds it overwhelming, even when the cause is a good one he’d like to support. Doing so costs him time (he often flies to big national events), money and, although he doesn’t say so in his article, energy. He’s says he’s had enough, so here are the ground rules Chiarello lays down now when fundraisers ask him to donate his time and services to their event:

“1. I cook their dinner for eight (or six or twelve or twenty) in the restaurant. That way, I can still take care of all the other patrons at Bottega that night. And I get to go home and see my wife afterward.

“It’s the only win-win solution I have been able to come up with that sounds fair all the way around,” Chiarello concludes. Fair indeed. Better, this approach gives him tight control over his charitable giving while keeping other aspects of his personal and professional life unencumbered. We can see many other restaurants and chefs adopting a program like this one. How about you?