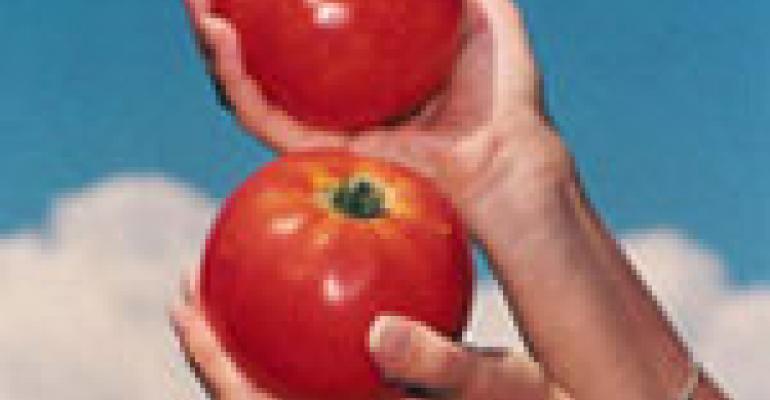 We were relieved and impressed by how quickly restaurant operators yanked raw tomatoes off their menus before news of the tomato-related salmonella outbreak broke in the national media. But while the restaurant end of the food safety chain got up to speed in a hurry, questions are beginning to arise about the U.S. Food and Drug Administration’s performance. The agency has put out plenty of warnings and information about which types of tomatoes and which tomato-growing areas are safe. But it hasn’t been able to pinpoint where the salmonella-tainted tomatoes are coming from. That’s what restaurant operators and their customers want to know.

“Fascinating,” is how the situation is described by food safety attorney/advocate Bill Marler. “They aren’t telling us whether the tomatoes were mishandled or, as seems more likely given the disparate geography, that the problem is similar to the spinach outbreak—where the disease is introduced into the plants as they grow by the conditions in the ground they grow in. Scary.”

Scary indeed. The outbreak began on April 23, and the magnitude of the situation gradually manifested itself during the following weeks. FDA issued a warning on Tuesday, June 3, 2008, limited in scope to consumers in New Mexico and Texas. Residents there were advised to forego raw red plum, red Roma or round red tomatoes. Cherry tomatoes, grape tomatoes, tomatoes sold with the vine attached and homegrown tomatoes were OK.

The warning was expanded nationwide on Saturday, June 7. Our early morning visit to an Einstein’s Bagels outlet that day found a “No Tomatoes” sign already posted at the order counter; a mid-afternoon stop at a Chipotle unit found a similar no-tomato policy in effect. Many other restaurants concurrently followed suit. For once, the industry had gotten ahead of a food safety problem before it broke.

But that wasn’t the end of it. We are still waiting to learn where the bad tomatoes are coming from, and if any might still be in the pipeline. As this edition of the RH e-newsletter went to press on June 13, the best FDA could come up with was that the outbreak “may be limited to a single grower or packer or tomatoes from a specific geographic area.”

Such vagueness would be understandable if the tomato/salmonella problem was a one-shot deal that had just come to light last weekend. But it’s been going on for quite a while—so long that FDA began a Tomato Safety Initiative in Florida in 2007 and continues it to this day. “This initiative is part of an ongoing, risk-based strategy to reduce foodborne illness by focusing food safety efforts on specific products, practices and growing areas, that have been found to be problematic in the past,” FDA says of this program.

Given the repeated incidence of salmonella and raw tomatoes, and given the large-scale Tomato Safety Initiative infrastructure already in place, a quicker resolution on the part of FDA might have been expected.

“In the days of the risk of bioterrorism, and with the advent of computer technology to pinpoint where our books from Amazon are, you would think we would be able to trace back contaminated tomatoes…a bit quicker,” Marler writes in his blog.

They’re working on it, but what should you do until the source of the unsafe tomatoes becomes clear?

FDA recommends that restaurant operators offer the known-to-be-safe types of tomatoes: cherry tomatoes, grape tomatoes, and vine-ripened tomatoes with vines attached. The problem types (red plum, red Roma and round red raw tomatoes) are also OK, if sourced from an area not associated with the outbreak. Those growing areas are located in:

That’s the official advice from the government agencies involved. The idea is that restaurant operators will carefully source only the right tomatoes from the right growing areas, menu them as they did before, and everything will be hunky-dory.

But that’s not how it’s working out in the marketplace. No business owner wants to take a chance on being a part of the next food safety disaster. Restaurants have banished tomatoes from their kitchens, and aren’t inclined to bring them back until the feds sound the all clear. Tomatoes growers, whose crops are ready for harvest, are praying for a quick resolution, too. So, of course, are consumers.

It’s interesting to note that while officials work to pinpoint the source of the tainted tomatoes, the U.S. market for Mexican-grown tomatoes has disappeared entirely. A spokesperson for the Sinaloa state Tomato Growers Association, which ships almost half of all Mexican tomatoes imported into the U.S., told the Associated Press that U.S. importers have simply stopped buying their product. Instead, these growers are forced to sell their tomato crop in Mexican markets, where the price is substantially lower.

We don’t know if Mexico is the source of this latest round of salmonella/tomato problems. But we do hope FDA tells the restaurant industry which growing area is, and fast.
Recommended Reading