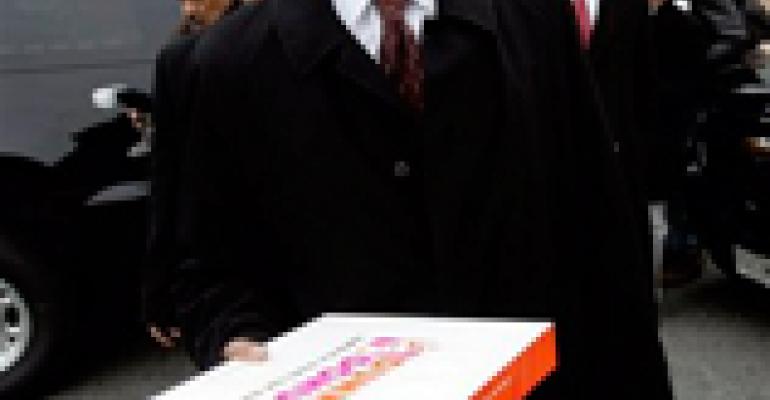 What President Obama is Ready to Deliver on Food

Remember when the big event in presidential eating was Bill Clinton going to McDonald’s? Now we’re about to find out how President Barack Obama’s campaign promise of “change we can believe in” will play out on the food front. What we know so far is that the new president has good taste in restaurants (his Chicago favorites: Frontera Grill and Spiaggia); won’t be pushed around by foodies on his choice of White House chef (Obama to Alice Waters: butt out); and, more ominously, has solid Democratic majorities in both the House and the Senate if he wants to make restaurant operators put nutritional information on their menus. How likely is the latter? You know something’s in the pipeline when even the National Restaurant Association is pushing for new federal regulations.

Perhaps the most curious presidential-food-related development this month came in early January, when outgoing First Lady Laura Bush revealed the all-new Bush legacy china for the White House. It’s what the Obama family and their guests will be eating off of until they come up with a replacement of their own.

Formally known as the “George W. Bush State China,” the collection consists of 320 14-piece place settings. It’s what they use at formal state occasions. For less-formal dining, Mrs. Bush is leaving behind “The Magnolia Residence China,” which features a floral motif. Combined price of the two sets: $550,000.

What, other than the last-minute timing, made this move curious? No one could figure out why the existing china needed to be replaced. The previous set of china had been introduced by then First Lady Hillary Clinton in Nov. 2000, on the occasion of the 200th anniversary of the White House. President Bush famously held only six state dinners during his eight years in office. His father, President George H.W. Bush, hosted that many state dinners each year. The “old” china had hardly been used.

This paucity of formal White House meal occasions may be one reason the job status of current White House chef Cristeta Comerford came up for informal review. She was elevated to the position in 2005 when longtime White House chef Walter Scheib departed. Few non-White House outsiders knew much about her cooking skills then or now.

Among those who questioned Comerford’s continued employment were three food world giants: chef/food activist Alice Waters from Chez Panisse, Gourmet magazine editor Ruth Reichl and Union Square Hospitality Group head Danny Meyer. The trio sensed that Obama could change the way the U.S. thinks about food if he’d merely follow their suggestions and lead by example. Here in part is what they said in a letter sent to Obama the day after he won.

Among those suggested changes were adding a vegetable garden on the White House Lawn; purchasing more food, preferably organically grown, from local farmers; and showing Comerford the door, ideally replacing her with a higher-profile person whose cooking methods were more in tune with the tastes of Waters, Reichl and Meyer.

Scheib took exception to Waters & Co.’s remarks. He agreed with much of their agenda, but pointed out that the trio was ill informed about the White House food setup. For one thing, there is a garden on the White House roof that churns out plenty of fresh veggies for the First Family. For another, the White House buys local and seasonal food from an ever-shifting network of area farmers and co-ops, using roughly 40 small purveyors in all. It had been kept low profile for security reasons. Indeed, if it became widely known that a supplier was delivering to the White House, the Secret Service would end the relationship. And also, it turns out that Laura Bush was a stickler for organic food, although she didn’t care to advertise the fact.

As for who should become White House chef, suggestions ranged from Chicago’s Rick Bayless to Art Smith (Oprah Winfrey’s personal chef) or Alice Waters herself. Waters didn’t think she had the chops. “I can cook for a small group at Chez Panisse but it’s another job overseeing a large staff turning out big dinners,” she told the San Francisco Chronicle. “I personally do not have that kind of flexibility, creativity and professionalism.” Bayless and Smith are fine talents, but big formal banquets might not be their strong suit, either.

Wisely, Obama didn’t yield to the pressure to replace Comerford. She’s still on the job. But the Obamas are bringing in Sam Kass, who had been their private chef in Chicago, to help out. “He knows what they like and he happens to have a particular interest in healthy food and local food,” says Katie McCormick Lelyveld, a spokeswoman for Michelle Obama.

RH enewsletter readers may recall that when Scheib stepped down as White House chef in 2005, the Women Chefs and Restaurateurs organization and others demanded that a woman be installed as White House chef, and Comerford quickly was. We’ll keep watch to see if the WCR has anything to say about her new job-sharing arrangement with Kass.

But this is all token pressure compared with what other corners of the food world have in mind for the Obama regime.

During the last eight years, such food issues such as trans fats, menu labeling, the obesity epidemic and diabetes have been addressed piecemeal at the local and state level in some jurisdictions. Get ready for full-blown federal regulations to emerge on some or all of these fronts now.

“The Obama administration clearly believes strongly that government has a major role to play in many arenas, including protecting the public’s health,” says Michael Jacobson, director of the Center for Science in the Public Interest.” He means putting CSPI’s wish list into law.

The National Restaurant Association wants to get ahead of the problem. It’s formed the Coalition For Responsible Nutrition Information (CRNI), which hopes to “provide consumers across the country with detailed nutrition information in chain restaurants and other foodservice establishments using a uniform standard. Providing restaurant guests with consistent nutrition information could contribute to an overall weight loss program and give consumers more control over what they eat.”

In other words, CRNI is hoping for a national standard that operators can live with, as opposed to various standards now in place or proposed by other jurisdictions.

CRNI is throwing its weight behind the LEAN Act. LEAN will “provide consumers with a broad range of nutrition information including sodium, trans fat, saturated fat, cholesterol, carbohydrates, sugars, proteins as well as calories to help them make decisions that are conducive to their lifestyles. In addition, the information will be provided in a convenient manner in writing in the restaurant that corresponds with their individual dining experience such as brochures, posters, in-store computer kiosks and menus.”

One food issue on which all operators would like to see more government intervention is food safety. Check out this quote from Dr. Steve Nissen, who’s on President Obama’s short list to be head of the Food and Drug Administration. When asked whether recent food chain crises such as E. coli-contaminated spinach and salmonella-tainted peanut butter were the fault of FDA, here’s what he told Cleveland Plain Dealer:

“The U.S. Department of Agriculture handles about a quarter of food regulation, and the FDA handles about three-quarters. Whenever you have more than one federal agency responsible for overlapping responsibilities, there are problems.

“You probably want to move the USDA responsibilities over to the FDA so that you have a single entity that's responsible for food safety,” Nissen said. “To improve food safety, we've got to have more inspections and random sampling. I have grave concerns about importation. We have to be in a position where we can protect the American public and make sure those foods are safe.

“The laws need to be modernized,” he added. “But also the FDA agency needs to be modernized. It needs a transformation and it has to happen quickly. I probably shouldn't say this but I'm going to say it anyway: I think it's a national security issue. We're terribly vulnerable.”

Scary stuff. But the good news is that food and food safety have moved to the forefront of public discussion, as they never have before. We’re not sure how these issues will play out, but we’re hoping there will be a net gain for restaurant operators. Let’s hope they start by getting a handle on the peanut-butter issue right away.