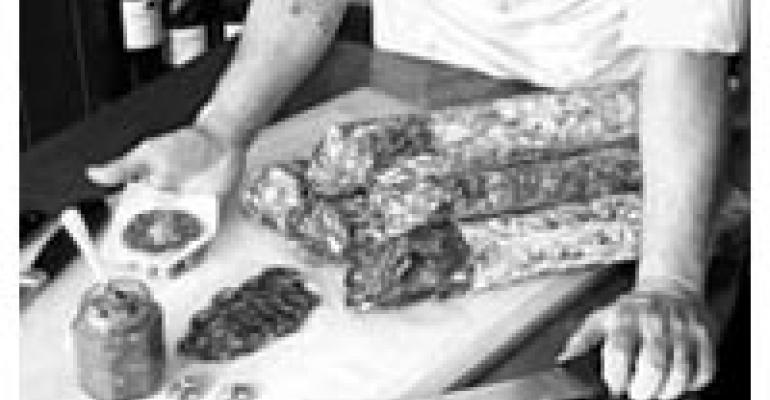 What you’re looking at is John Stewart, a salumist at work at one of his three businesses—Bovolo, Black Pig Meat Co. and Zazu Restaurant & Farm, all in Sonoma County. While John cuts into his beautiful product, his wife, Duskie Estes, weighs in on his tat. “Yeah, I like the tattoo. In fact, I attribute us being together because of another tattoo he has—a ring of elephants around his arm—that I saw in a dream before I knew him.

People do tease me that he has a pig tattoo rather than something about our two daughters or me, and also because I was a 22-year vegetarian before I met him. John learned to be a salumist from Mario Batali and he studied at the Meat Lab at the University of Iowa. The tattoo he has is the logo of Salumi, which is owned by Mario’s father, Armandino, a salumist in Seattle where we used to live. It was the first place we went to after we were able to leave the house with our newborn. John is currently considering a tattoo of St. Anthony, the patron saint of swine and other animals.”
Recommended Reading