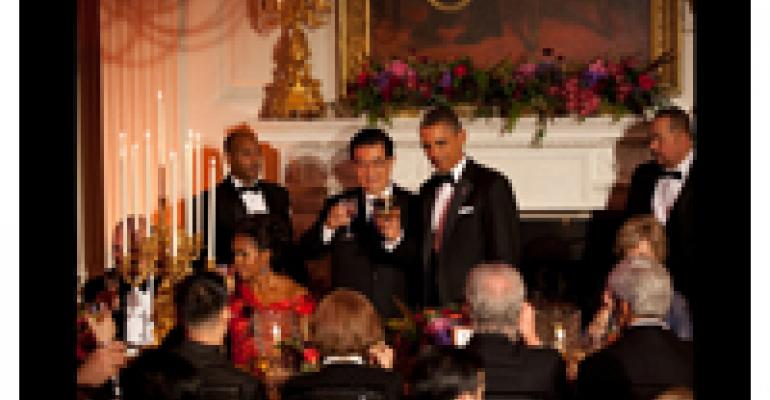 The assignment was fraught with peril: prepare a state dinner for 225 guests at the White House that would please both Chinese president Hun Jintao and anti-obesity crusader and first lady Michelle Obama. So how come the menu served last week went retro, featuring 1970s-style Continental cuisine? There’s a lesson here for catering big parties.

The challenge for White House chef Cristeta Comerford was to produce a meal that would be politically and nutritionally correct for guests from two much-different cultures, yet amenable to banquet-style service out of the White House’s notoriously small kitchen.

Pressure? As her predecessor as White House chef Walter Scheib told the BBC, “If one thing doesn’t go right, it’s not like a restaurant where you can give someone 10 percent off the bill and a glass of free champagne.”

At least the Chinese contingent made it easy by requesting something that was “quintessentially American.” But the menu still had to pass muster with Mrs. Obama, whose activism on food and dietary issues added an extra level of scrutiny to the process.

But after much sampling, revision and testing, a menu finally emerged. Strangely, the result seemed like a relic from the Carter administration, a throwback to the era of what writer Calvin Trillin dubbed “La Maison de la Casa House Continental cuisine.”

Let’s see, surf and turf, glazed carrots, double-stuffed potatoes, apple pie—this meal seems to ignore ever dietary and culinary trend of the last 30 years. Yet it was chosen by the most food-aware administration since the Kennedys to be served when they wanted to make a good impression on very important guests.

We’re not saying that Continental cuisine is ready to make a comeback. But there’s a reason these classic dishes became classic in the first place. If you’re asked to suggest a menu for a private dining or catering occasion where everything has to be foolproof, keep the Hu Jintao menu in mind. It’s as foolproof as it comes, on many fronts.