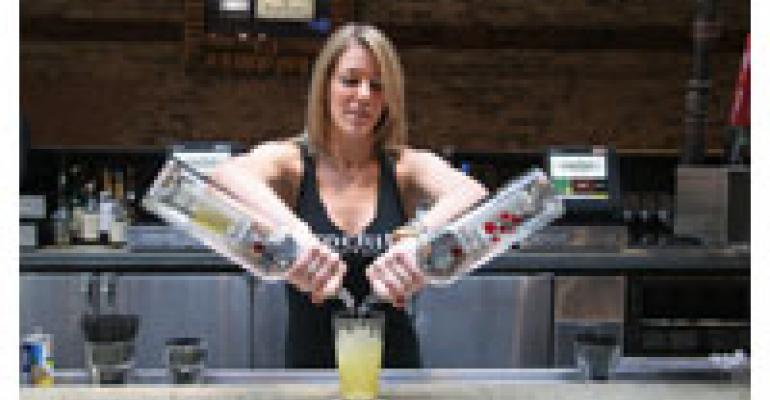 The good news: The National Restaurant Association’s Star of the Bar competition, conducted via YouTube, will give your mixologist a chance to win a $5,000 cash prize and become an industry star. The maybe-not-so-good news: Rules of this National Restaurant Association contest mandate the use of one specific manufacturer’s products. Is this limitation what operator-members want the NRA to do?

The Star of the Bar contest sounds like a lot of fun. First, your mixologist—or really, anyone who thinks they can concoct a cool new drink—records a 90-second video demonstrating how the cocktail is made. Then he or she uploads it to the NRA’s International Wine, Spirits & Beer Event’s (IWSB) website, along with a written recipe for the drink.

From there the NRA will post entries on YouTube, with YouTube users voting for six semi-finalists. Those chosen will fly to Chicago to prepare their drink at an IWSB event on May 23. Three of the six will advance to the finals and compete that same evening at the IWSB after-party for the big prize. Finalists will prepare their drinks for a panel of experts, who will pick the winner.

In addition to the $5,000 prize and Star of the Bar title, the winner will have his or her drink featured on the menu at Chicago’s Rockit Bar & Grill and written up in the American Airlines in-flight magazine, American Way.

Anyone can take a shot, so we’d suggest you come up with a drink and enter. Just be sure to display plenty of showmanship in your video to get the YouTube crowd to vote for you. After that, when it becomes an in-person contest, the best drink will win.

One caveat, though, and it’s a big one: all drinks must include at least one Bacardi product in their recipe. Nothing wrong with that; Bacardi has a strong lineup of branded spirits beyond its well-known line of rums, including Grey Goose vodka, Dewar’s Scotch, Bombay Sapphire gin, plus liqueurs like Drambuie and B&B. But if, say, cocktail king Dale DeGroff were to submit a killer drink recipe that did not use at least one Bacardi product, they’d kick him out of the contest.

There’s nothing wrong with the Bacardi-specific requirement, of course. In fact, it seems like super-smart marketing by Bacardi. And it might be super-smart marketing by the NRA, too, although we’re not so sure if single-sponsor recipe contests are something with which the otherwise-wonderful National Restaurant Association should be involved. By way of contrast, the NRA’s food recipe contest, the NRA Show Hot Chef Challenge 2010, requires only that the recipe creator include one fresh produce item as an ingredient. That ingredient can come from any supplier, or even be grown at home.

The deadline for the video submission (two-minute max) you’d use to enter the Hot Chef Challenge is April 29, 2010. Complete information can be found at show.restaurant.org/nra10/public/Content.aspx?ID=588.

What’s it cost to enter these contests? Nada. We say get your camcorder going and enter both. Just don’t forget the Bacardi.