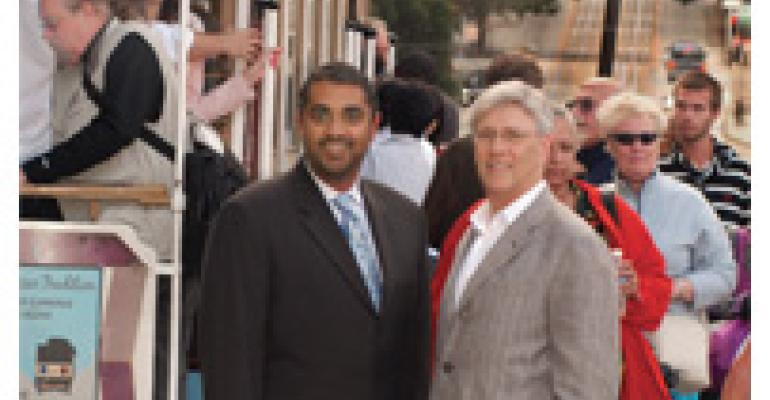 A not-so funny thing happened on the way to this year's Melman Award ceremony: recipient Michael Mina got mugged by the flu. But the star chef and restaurateur put up one hellluva fight. Check out the cover and above. There he is with the legendary Rich Melman standing in the middle of a San Francisco street in his Sunday's best. That photo shoot took place just minutes before Melman was to present the award named in his honor to Mina at a banquet. “Go home, Michael, you're sick,” said Melman. “Our Concepts of Tomorrow Conference attendees will thank you for it,” I added. And they did.

As you can see from the photo below, Melman and I shared the stage without the fallen hero. But that didn't stop me from saying nice things about Melman, the top dog at Lettuce Entertain You Enterprises in Chicago. Before arriving in San Francisco for the conference, I had dropped in on several of Melman's landmark Chicago restaurants (including Scoozi, Café Ba-Ba-Reeba and Shaw's Crab House), all of which are 20-plus years old and as vibrant as the day they opened. I've long known that Rich Melman was the greatest concept creator of all time, I explained to the crowd, but his ability to nurture a brand and keep it exciting and relevant for decades is astounding.

But the night belonged to Mina, even if he was home ill in bed. At a mere 40 years old, he now oversees a 17-restaurant empire in seven states and Mexico. But he's more than just a restaurateur. When lists are compiled of the best chefs in America, Michael Mina's name is always near the top.

Born in Cairo and raised in Washington State, Michael's first big break came in 1991 at Aqua in San Francisco. During his tenure there, he was named the James Beard Rising Star Chef of the Year and, several years later, James Beard's Best Chef in California. And topping it off, in 2004 Bon Appétit named him Chef of the Year.

Mina left Aqua to form The Mina Group with tennis superstar Andre Agassi. And in the five years since the company was launched, it has given birth to numerous top-flight restaurants around the country and Mexico, including Michael Mina the Restaurant, Clock Bar, RN74, IVX, Stone Hill Tavern, Arcadia, Bourbon Steak, Saltwater, Nobhill Tavern, Stripsteak, Seablue and Nemi.

In a relatively short time, Mina has created one of the country's most respected restaurant companies, while remaining one of its most gifted chefs.