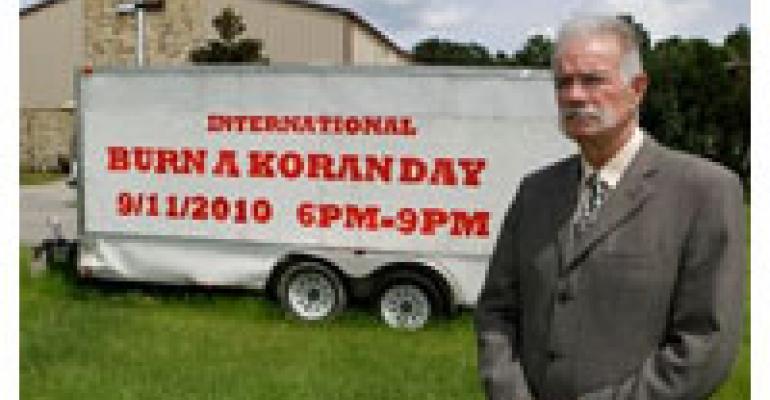 Even though Rev. Terry Jones didn’t go through with his plans to burn the Koran on the anniversary of the 9/11 attacks, there’s a foodservice-related issue he needs to address. Aspiring ministers who study with Jones at his Dove World Outreach Center (DWOC) in Gainesville, FL, are explicitly barred from eating in restaurants. We’re all for freedom of religion as spelled out in the Constitution, but when did a restaurant meal become an occasion of sin?

Students at Jones’s DWOC Academy aspire to become what’s known as a Five-Fold minister in the DWOC ministry system. They must adhere to a lengthy set of rules during their course of study, a number of which strangely relate to food. “The rules are to be taken to heart and obeyed and God will open doors to fulfill the call that is upon their life!” says the Rev. Jones.

Fair enough. Most rules involve the student’s behavior and attitudes, methods of communications with outsiders, evangelism duties and study requirements. But one large section involves food.

Jones and the DWOC proscribe a light and healthy diet in which sweets, cakes “and things like that” are not allowed. There’s no alcohol, either. But other than that, “The student is responsible for what he eats. There is no law about that.”

But there is a law about where he eats it. “No eating out in restaurants,” the DWOC proscribes.

It gets stranger. “Students will be put on the scale once a week to follow the tendency,” the rulebook warns. “Each student received his weight goal, that must be reached, otherwise this category is failed.”

It’s OK with us that the Dove World Outreach Center takes such a high interest in the dietary habits of its prospective clergy. But banning people from eating in restaurants? Let’s just say that if you were trying to decide if Jones was crazy for dreaming up his Koran-burning stunt, feel free to let his anti-restaurant stance inform your decision.