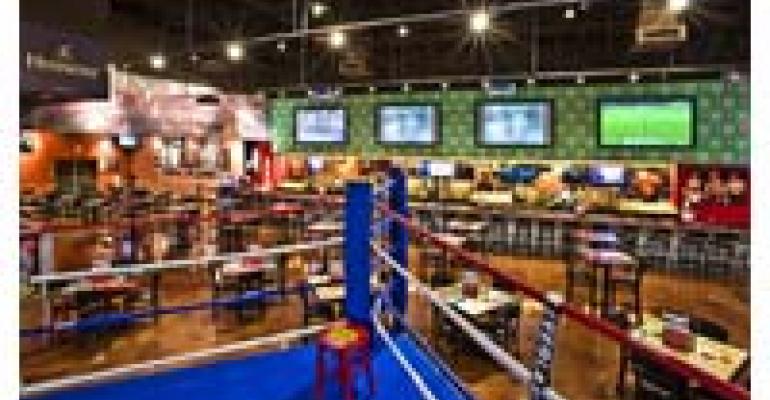 At the new Julio César Chávez Campeones in Mesa, AZ, nobody tells the guys who want to fight to step outside. Instead, combatants are welcome to hop right into the dining room’s full-sized boxing ring to settle their differences. It’s just one of the many unique features of this restaurant-entertainment complex that opened late last year. Chavez is new at the foodservice game, but he knows exactly what his target demographic wants.

Chavez, a six-time world boxing champ who fought in 37 championship fights, is a living legend in the Mexican community. He might become one in the restaurant community if he can make a go of the new Julio César Chávez Campeones. He’s not the first celebrity sports figure to lend his name to a restaurant, but we can’t think of another one who has attempted anything on the scale Chavez is doing here.

Campeones (Champions) is much more than a restaurant, and its backers describe the whole complex as a “family entertainment center.” Here’s how they position it, with the publicity release perhaps written with some of the posturing and bluster more typically employed before a championship fight:

“Julio César Chávez Campeones will cater to the Hispanic community with quality Mariscos and Carne Asada, a state of the art sports bar and a cultural events center to host the best Spanish language artists, boxing matches, quinceañeras, wedding receptions etc. This venue will be the first of its kind in the world and will demand more buzz and energy than any other venue before its time. Campeones… will rival and best the impact Planet Hollywood or the ESPN Zone created with the American Anglo community.”

We don’t know if Julio César Chávez Campeones will live up to that last claim, but it’s big enough to. The restaurant/sports bar/arcade portion of the complex can accommodate 850 people, and there’s room for an additional 1,700 elsewhere in the 30,000-sq.-ft. facility.

Chavez has some solid people in his corner on this project. One of his partners is Brian Weymouth, who in 1998 created the still-thriving Alice Cooperstown restaurant in Phoenix with shock rocker Alice Cooper. Another partner is Brian Day O’Connor, son of recently retired U.S. Supreme Court Justice Sandra Day O’Connor. Collectively, this crew says the “the concept will have the energy of a championship fight, with the ever-beautiful Ring Girls as waitresses and Mexican entertainment inspired by Coyote Ugly but with a Mexican flair.”

Given this promise, who’s not going to visit Campeones to see what it’s all about? Certainly the legions of Chavez’s boxing fans inside and outside the Mexican community will check it out. They’ll find plenty to do, plenty of room to do it in and a lengthy menu featuring a host of traditional Mexican favorites at modest prices. It’s tempting to dismiss the idea of a boxing-themed restaurant, but we can see this one working not just in Phoenix, but also in other cities that have a strong Mexican-American community. There aren’t many big-deal restaurant concepts tailored specifically to this market, but Campeones is. Expect plenty more if it works.