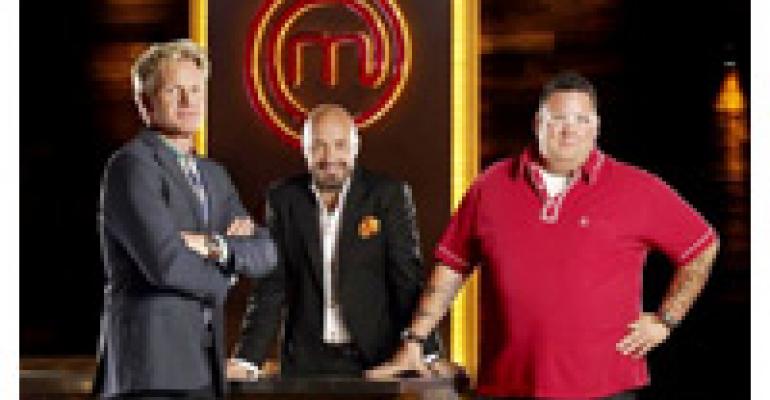 Pestered by job-seeking chef wannabees? Got FOH employees eager to try their hand in your kitchen? Now you have someplace to send them: Gordon Ramsay’s new Fox reality series MasterChef, where amateur cooks compete in the hopes of going pro. The network honchos promise no yelling and screaming from the Hell’s Kitchen bad boy this time around. Do you believe them?

Whatever you might think of Gordon Ramsay as a chef and restaurateur, his ability to deliver television ratings is undeniable. He’s proven it on multiple reality shows that have aired on three continents. In the U.S., Hell’s Kitchen is now into its seventh season and has turned into a cornerstone franchise for the Fox network. Kitchen Nightmares, the show where Ramsay helped U.S. restaurateurs resuscitate their failing operations, was a ratings winner, too. However, we won’t be seeing any more of that series on Fox. Too many lawsuits.

Now comes MasterCbef, in which 50—you read that number right—amateur cooks compete for a big cash prize and a chance to work with professionals. The only restrictions are that participants must be at least 18 years of age and cannot be a professional cook (although the fine print on the application makes it seem that part-timers can get in).

The show debuts on the Fox network on July 29. There will be at least 12 hour-long episodes in the series, perhaps as many as 15.

The show’s format seems designed to push both the highly volatile Ramsay and the contestants over the edge. Hell’s Kitchen has shown us how well Ramsay tolerates culinary ineptitude, and that’s on a show where the contestants have a professional culinary background. We can only imagine what will happen when Ramsay has to deal with amateur cooks—which is the very reason people will tune in.

However, Fox tell us MasterChef is designed to show us Ramsay’s softer side. Helping to keep his temper in check will be the show’s two judges, Joe Bastianich and Graham Elliott Bowles. Bastianich is a partner in all 14 of Mario Batali’s restaurants, and Bowles is chef/owner of the much-honored Graham Elliot in Chicago.

Will a setup like this make for good TV? A similar version certainly did in Australia, where the 2009 edition of MasterChef was shown six nights a week for a couple of months. There were a whopping 66 episodes in all, 10 of them “final episodes,” and ratings were through the roof.

So what’s in it for you? For one, now you can tell people who want to work in your kitchen but lack experience to go on this show and prove themselves. Fox has already chosen the 50 participants for the inaugural run of MasterChef, but we’re thinking there will be subsequent editions. It seems likely that the show will convince many viewers that they are just as talented as the neophyte cooks who made it onto the first season of MasterChef. So you can expect more amateurs to seek paid kitchen work from you.

For another, the show just might give you a way to scout some new talent for your restaurant’s kitchen. Aspiring cooks who can make it at least part of the way with Ramsay, Bastianich and Bowles setting the standards would probably do a good job for you. That alone should be reason enough to watch MasterChef at least once.