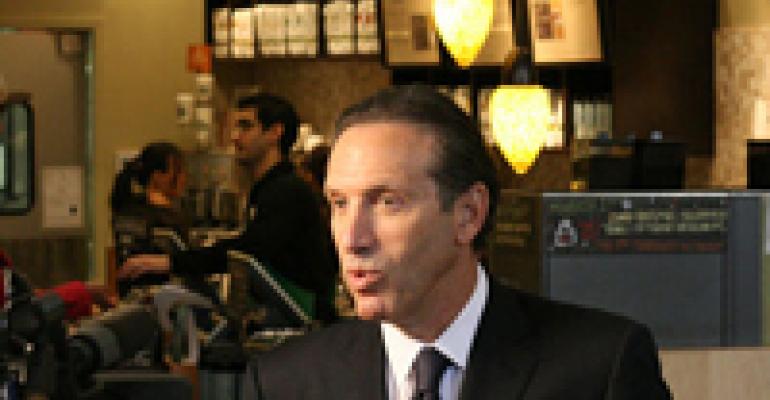 He liked the Machine So Much, He Bought the Company

You may or may not want to emulate the new breakfast offerings from Starbucks—six “healthy” breakfast options, each carefully configured for takeout portability. But you definitely want to try the product produced by one of its $11,000 Clover 1s coffeemakers, which brew regular coffee—not espresso—a single cup at a time. Starbucks tested a few of these machines and then quickly bought the company that manufacturers them. Starbucks won’t sell one to you, but some of the 250 pre-Starbucks Clovers are floating around in the aftermarket. If you see one, buy it.

Starbucks has had a problematic relationship with the food aspect of the foodservice business forever. It should be a no-brainer for the company, because a perpetual stream of hungry customers flows into its stores each day, particularly during the morning hours. All the company has to do is figure out what type of food they want and sell it to them.

But there are limitations. Units don’t have prep areas or, until recently, cooking equipment. Over the years, Starbucks has rolled out successive iterations of hand-held or eat-on-the-go items that were prepared elsewhere, packaged up and trucked to the stores for sale. None of them really tapped the massive food opportunity presented by its customer base.

In 2006, Starbucks jumped into the hot breakfast sandwich market by installing high-speed TurboChef ovens in its units. Sales were OK—a single, not a home run—but offering hot sandwiches came at a price. Their preparation filled Starbucks units with the aroma of meat, eggs and cheese. When Starbucks founder Howard Schultz came out of semi-retirement last year, one of his first initiatives was to return the chain to a focus on the coffeehouse experience, which to him did not include cooking smells reminiscent of fast food rather than coffee.

Schultz moved quickly. The sandwiches aren’t out—they’ve been reformulated to be less aromatic. But the big new breakfast emphasis is on six new “health and wellness” offerings that are as nutritionally correct as food can be. The breakfast assortment, introduced earlier this month, features whole grains, real fruit, nuts and seeds, and healthy fats like Omegas-3s. No artificial colors, flavors, sweeteners or high fructose corn syrup are used.

Here are the new breakfast items now being served by Starbucks:

• Power Protein Plate: This $4.95 offering combines “a cage-free hard-boiled egg, 100 percent whole wheat bagel, peanut butter, cheese and fresh fruit.” It weighs in at 330 calories and has 16 grams of protein. Internet bloggers wonder who peels these eggs, and when. Good question.

• Apple Bran Muffin: It’s made with whole-wheat flour, oats and wheat bran, and baked with real apples, tart cherries and honey. It contains 330 calories and costs $1.75.

• Baked Berry Stella: This star-shaped pastry resembles a quick bread and is heavy on the berries. It has 280 calories and sells for $1.75.

• Chewy Fruit and Nut Bar: Containing oats, dried fruit, nuts, seed and honey, this $1.75 offering has a pristine nutritional profile and a lighter texture than grocery store breakfast bars. It comes in at 250 calories.

• Multigrain Roll With Spreads: Made with seven different seeds and grains and sweetened with honey, this 280-calorie bagel alternative sells for $1.60. It comes with a 100-calorie pack of almond butter and a 60-calorie pack of strawberry preserves.

If you do much to-go breakfast business at your operation, you may want to keep an eye on how well these items perform for Starbucks. They will tell us how big the market is for simple, nutritional, inexpensive breakfast items.

But maybe Starbucks is low-balling on that price point, because most of the coffee and other drinks it sells cost more than their new breakfast items. And the company is looking to break new ground on the price of some of its brewed coffee, courtesy of the cup produced by its new Clover machines which, in tests, sells for as much as $3.05.

The Clover is a handmade (hence the $11,000 price tag) coffeemaker that in effect employs the French press coffee making method in reverse. It’s programmable (i.e., idiot-proof) on three key coffee-making variables: dose, water temperature and brew time. The independent coffeehouses that already have Clovers sell the coffee produced by it for between $3 and $7 a cup, depending on the quality of beans used. Starbucks sells cups for about one dollar more than its regular coffee price.

The Clover is a huge deal for coffee aficionados; check out the videos on YouTube for the full explanation of why. And it certainly made a big impression on Schultz. “In my 25 years at Starbucks, the Clover machine unquestionably delivers the best cup of brewed coffee I have ever tasted,” he told Starbucks shareholders last year. “We want to share this experience with our customers.”

But it won’t be sharing Clover machines with anyone else in the foodservice business. So successful were tests that earlier this year, Starbucks bought Coffee Equipment Company, the outfit that manufactures the Clover. Will CEC still sell Clovers to all comers, as has been the case up to now? Or will CEC become an exclusive supplier to its new owner? It’s the latter. “Frankly, we just don’t want anyone else to have it,” says Michelle Gass, senior vice president of global strategy for Starbucks.

But you still might be able to get one for your restaurant. Starbucks says it will support, maintain and repair existing Clover units. And you’d think some of the independent coffee houses that plunked down $11,000 apiece for one or more Clovers would be hanging on to them for dear life. That’s not necessarily the case. “When we found out that CEC was sold to Starbucks, we made the decision to sell our Clovers,” says a coffee house owner who had four Clovers. For many proud independents, having the same thing as giant Starbucks is the last thing they want to do. They’re upgrading to the $20,000 siphon bar-style brewed coffee maker from Japan.

Clovers are handmade machines, so don’t expect a rapid rollout at Starbucks. The company expects to have 80 machines installed in upscale markets by the end of 2008, with more to come in subsequent years. But even the snootiest coffee aficionados agree that the Clover makes a killer cup of coffee, every time. If you get a chance to buy one grab it. It looks like the Clover will be a museum piece and profit-generator all in one.