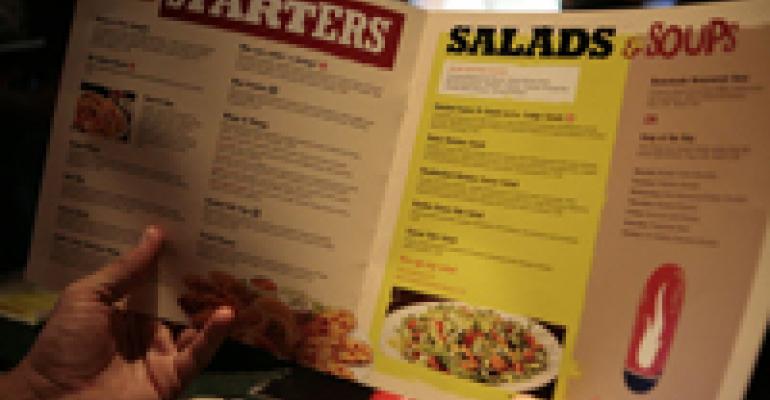 Giving Away the Store

You think running your restaurant is tough in this rocky economy? How’d you like to be in charge of Smokey Bones Bar & Fire Grill, the chain formerly known as Smokey Bones Barbecue & Grill before Darden Restaurants unloaded it last year? One problem: New owners Sun Capital Partners had just begun to reposition this 73-unit concept when the recession kicked in. Another: Many people think Smokey Bones had gone out of business. No wonder its management is offering December-only deals to customers that other operators don’t dare match. But what will it take to attract customers once these limited-time offers expire?

Fast-food operators have relied on coupons, bargain-priced special items and other types of deal-making for decades. There’s no question these tactics are effective: They bring customers in and deliver a short-term boost to revenue, albeit doing so at the cost of gross margins and overall profitability But there’s a long-term effect, too. Once a restaurant goes down this road, it can be hard to keep customers coming back when the promotional period is over.

Full-service restaurant owners have traditionally avoided this strategy. But the current downturn has convinced many of them to give aspects of it a try. The two methods most frequently employed are the kicker-on-a-gift-card-purchase (e.g., buy a $100 gift card at any Brio Tuscan Grill and get a $20 card for yourself) and lowball pricing on a subset of menu items (Steak ‘n Shake’s “4 Meals under $4” promotion). Less frequent is the BOGO—buy one, get one free—offer. A handful of places have gone so far as to offer BOGOs for entrees, hoping to make up the difference on the beverage front.

Variations on these themes are showing up at chain and independent restaurants that had never used them before. How come? We’re not sure if there are simply too many restaurants, as some analysts suggest, or whether customers are spending even less money in restaurants than these same analysts predicted. But the collective effect of this industry-wide deal-making is that right now, it now takes more and more incentives just to get customers in the door.

Sun Capital has experience breathing life back into struggling restaurant brands, and it set out to do the same to Smokey Bones. Out went the mountain lodge-cum-sports bar motif that had been the standard in the Darden era. Its replacement was a bar-centric approach big on high-top tables and flat-screen TVs. “A thorough look at our brand in partnership with our branding agency, Push, showed us that customers desire more than just dining at Smokey Bones,” says Peter Bell, the concept’s v.p. of marketing. “ We’re now much more than simply a place to eat—we’ve evolved to provide an unforgettable experience, making customers want to come back time and time again.”

The top-to-bottom rebranding also saw the removal of the word “barbecue” from the chain’s name, even though plenty of barbecue items remain on the menu. The new strategy emphasizes the chain’s expertise with fire-grilled and slow-smoked foods. Couple that with the décor makeover and the new Smokey Bones seemed like a winner, especially given the excellent real estate inherited from Darden and the fact that all the underperforming locations had already been closed.

Sun Capital rolled out its prototype Smokey Bones Bar & Fire Grill in August in the Waterford Lakes community near Orlando. The idea from there was to first extend the rebranding effort to seven other Central Florida units, then take it nationwide.

This was a well-strategized rebranding effort that, given normal market conditions, should have gotten Smokey Bones back on track. But the economy didn’t cooperate. Smokey Bones now numbers 69 units, announcing in November that it had closed two units apiece in the Orlando and Jacksonville markets. The reason: underperformance.

How are the rest of the units doing? We don’t know, and since Sun Capital isn’t public, we’re not likely to find out. But we can make a good guess by analyzing the deal flyer that came folded into our local Sunday newspaper last week. It’s got every deal other operators are offering, and more.

Gift cards? Customers who purchase a $25 Smokey Bones card get $5 off their meal instantly, plus $5 in “Bah, Humbug! Bucks” to use on a future visit. That’s a 40 percent premium for the customer, and a 40 percent giveaway from the Smokey Bones perspective.

Economy offerings? The six-item “Flammable Flavors” menu starts at $5.99 and includes appetizers like Wicked Hot Wings, full meal entrees like the Big Jerk bone-in chicken, sandwich platters like the One Hot Chick and Blazin’ Bones—baby back or St. Louis- style ribs that come with two sides.

And if none of this will suffice, the deal flyer includes a “$10 off your visit” coupon that, other than not being good on alcohol, is unrestricted.

Wow. If one of these approaches won’t convince people to eat at Smokey Bones, what would? To be sure, the idea is to get people in the restaurants and hope they spend enough on beverages, alcoholic or otherwise, to keep unit economics in line. The deals, which expire on Dec. 28, could turn out to be lifesavers for Smokey Bones, although we don’t know what the chain can do for an encore come January. But in the meantime, these are the most significant givebacks we’ve seen. Smokey Bones definitely swung for the fences with this promotion.

And they’ve left their competitors in an awkward spot. Many, many other restaurant operators have responded to the recession by offering customers either gift card bonuses or value-priced mini-menus, with some offering both. But few if any have gone the straight $10-off-any-visit route, which is a significant profit buster for all but the most expensive full-service restaurants. Customers who play it right can get a free lunch.

The scary part here: The success of these and most other full-service offers ultimately depends on customers spending big bucks on beverages. One of these days, the restaurant industry is going to have to go back to making money by preparing and serving food, not hoping customers keep paying jacked-up prices for drinks.