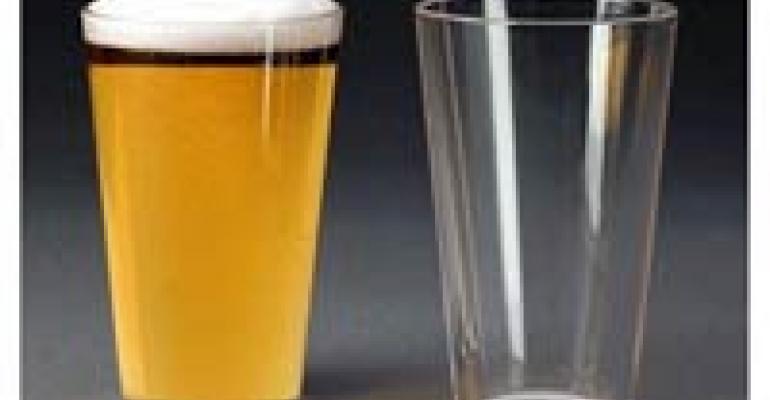 Gastropub Owners: Get Ready to Duck

Better put some extra bucks into your glassware budget if you’re thinking about opening a British-themed gastropub in the U.S. It’s a hot segment here, but you may draw some of the same rowdy clientele they do in Great Britain. Pub operators there will soon be switching to government-developed shatterproof pint glasses because breakable ones are so frequently used as weapons in what the British government says are 87,000 alcohol-related glass attacks per year. Let’s hope your patrons are less belligerent than the Brits.

You get an idea about how unruly British pub goers can be when the government has to go into the pint-glass research business to stop them from killing and maiming each other. But with 87,000 pint-glass attacks occurring each year, British Home Secretary Alan Johnson knew that something had to be done. He led the effort that has developed a pair of shatterproof pint glass technologies that should cut down on serious and costly injuries.

The problem is that patrons do battle by smashing the now-standard breakable pint glasses—often over a fellow customer’s head—and then slashing that person or others with the jagged edges that result. In whole form, the glasses are like a club; broken, they do the same job as a knife.

“Glassing causes horrific injuries and has a lasting impact on victims and their families,” Johnson told the Associated Press. “I hope these designs will bring and end to such attacks.”

You may be wondering why the government got involved in the glass development and design business, rather than the glassware manufacturing industry. The answer: Healthcare costs. Estimates are that attacks involving alcohol and pint glasses cost the government $4.7 billion each year.

Two types of glass design have made it to the prototype stage. One is a two-layer glass sandwich similar to what is used in a car’s windshield. The other relies on a resin coating applied to the pint glass’s inner wall. Both can be broken, but the shards of glass stay together, rendering them useless as a slashing mechanism in a fight. Slashing, particularly around the head and neck area, produces the injuries that are most costly to treat.

The obvious and readily available solution to the problem—plastic glasses—was a non-starter in Britain’s traditional pub culture. They just didn’t have the right feel.

The first tests for the shatterproof glasses will be conducted at units of one of Britain’s major pub chains. If they work as planned, they will be introduced elsewhere on a voluntary basis.

Hopefully, U.S. operators won’t have to worry about drunken battles in their gastropubs. But if your current operation has a bar that gets a little crazy toward the end of the night, or if you just get more breakage than you can afford, keep an eye on how well the British prototype pint glasses work out. They could help you avoid a lot of trouble and expense if they do.