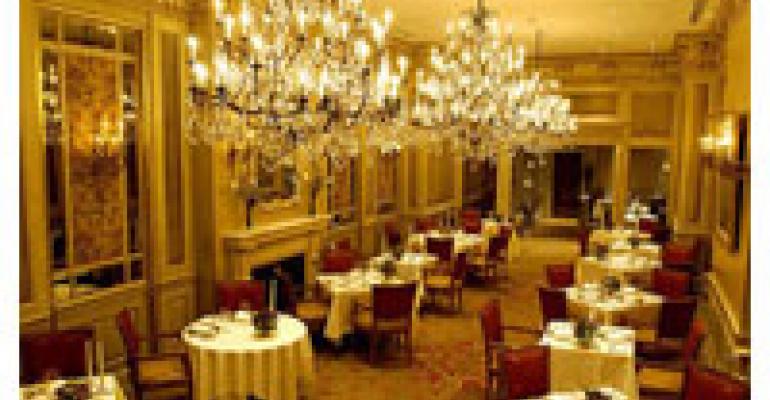 Forget Chef/Owner. Be a Chef/Landlord

Feeling sorry for Philadelphia chef-legend Georges Perrier, who just put his world-renowned Le Bec-Fin in Philadelphia up for sale? Don’t. The restaurant business can be had for $600,000, liquor license included. The building, though, is separate. Its list price: $3.9 million. There are some key business lesson here for you.

Le Bec-Fin, an old-school French fine dining restaurant of the highest order, has been the flagship of Perrier’s mini-empire in Philadelphia for decades. It still serves world-class food in the kind of ornate, palatial setting they just don’t make anymore. A meal there is the type of luxurious dining experience for which, alas, the market has shriveled.

So Perrier is getting out. He still has a couple of other irons in the fire, and has plans for a couple of new, less-ambitious restaurants that could open within the next year.

“I’ve thought about this a long time,” he told the Philadelphia Inquirer. “The food is still spectacular, but I think it’s time to move on, When you close, you certainly can’t feel good about it. It is what it is.”

Most full-service operators would like to feel the pain Perrier is about to feel. He assumed full control of the four-story building that houses Le Bic-Fin in 1996, paying $235,000. Now it’s listed with Philadelphia commercial real estate firm Mallin Panchelli Nadel Realty for $3.9 million. The upshot: No matter how much money Perrier made or didn’t make running his restaurant, appreciation in the underlying real estate has earned him a couple hundred thousand dollars a year.

His experience illustrates several lessons that could be applied by other restaurant operators who are looking for a site for their next venture.

First, find a location in a down-on-its-luck, but promising, neighborhood.

Second, purchase, don’t lease, the real estate. Hundreds of developers have made their fortunes by counting on hip restaurants to be the cornerstones of new real estate ventures in sketchy areas. Why not you? You need to be an equity participant, not a leaseholder, to participate in the long-term benefits as the area gentrifies.

Third, recruit some of your restaurant industry pals to move in near you, creating your town’s next “Restaurant Row.” That’s how it worked for Perrier in Philly.

Fourth, time your exit strategy. Real estate fluctuates in long-term cycles. Perrier happens to be getting out when commercial real estate values are down. However, so are mortgage rates, increasing the pool of potential buyers able to qualify for a loan. It’s not the greatest time for Perrier to be selling a piece of commercial real estate, but it is a great time to acquire one

Finally, realize that operating your restaurant may be a means to an end, not the end itself. Even if you only break even operating the restaurant, there’s a big payoff—most likely, an all-cash payoff courtesy of the new owner’s mortgage loan—waiting for you at the end of the venture.

Perrier’s experience vividly illustrates why restaurant owners should take an ownership role in their operation’s real estate. If you’re the leaseholder at the time when the restaurant has run its course, you get nothing. If you’re an owner, you receive a pile of cash as part of the real estate closing. That’s the restaurant game played well.