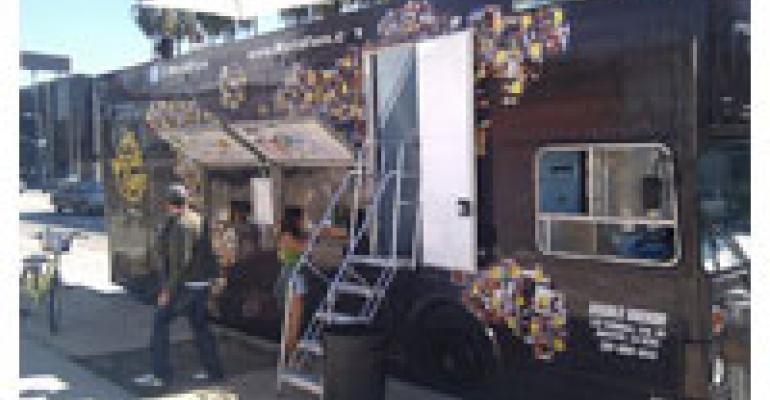 Food Trucks: Meet The Next Generation

Get left behind when the food truck craze took off? Why not jump on board early with the latest development in the mobile food marketplace—the bustaurant. Current number of vehicles on the road: at least three, with plenty more to come.

As food truck offerings and equipment have become increasingly sophisticated, the people who work in what we’ll call the mobile restaurant segment have begun to ask themselves: what else could we do with these vehicles? The latest answer: Give customers a place to sit down and eat on board. With this approach, food trucks are out, food-dispensing buses are in.

Diamond Lil operates out of a converted Greyhound bus and follows the model of a private dining room on wheels. Patrons—capacity is 16—board and travel to a predetermined destination, where they are served their food once the bus is parked. Its business model is akin to that of the Napa Wine Train: Climb aboard, go someplace cool, eat a meal prepared by the onboard chef when you get there. Unlike the wine train, bustaurant chefs don’t cook on the move. Why? It’s illegal.

Le Truc, in part, adheres to the classic food truck model. The 36-foot-long repurposed school bus is driven to a location where crowds are expected to gather. There the owners secure a parking spot and set up shop. Food is then prepared and served to walkup patrons through a side window. But there’s also a five-course prix fixe menu for the 16 patrons who dine inside the bus. Those spots are reserved in advance via Le Truc’s Facebook page.

Le Truc’s grand opening was at San Francisco’s Eat Real street food gathering in early September. It was a hit. “We were lucky to get a great spot at the event and sold close to 1,000 meals in two days,” says owner Blake Tally. For another event—known as Off the Grid—Le Truc brought in guest chef Jennie Lorenzo, who used to cook at noted San Francisco gourmet palace the Fifth Floor. She did window duty and also took care of two seatings of prix fixe diners, each attracting 16 diners. Cost of the in-bus experience that day: $35.

Los Angeles bustaurant World Fare has been in business since March, making it an old-timer in this emerging segment. Creators Travis Schmidt and Jason Freeman repurposed a vintage double-decker bus, serving food out the bus window at street level and providing open-air seating on the upper level for customers who prefer a sit-down meal. World Fare’s executive chef, Andi Van Willigan, was previously corporate executive chef for the Michael Mina Group. She’s opened 11 restaurants in eight different states, so she’s used to moving around. Her specialty: the Bunny Chow. “Originally a South African street worker food,” World Fare owners say, “it’s a hollowed out loaf of bread filled with chicken curry. Chef Andi has taken the concept to a new level as a portable easy-to-eat medium for serving different flavors from around the world.”

We can see the bustaurant model working in many cities, especially the enclosed versions like Diamond Lil and Le Truc. They take inclement weather out of the equation. We look forward to seeing what operators come up with.

The lone drawback we see is the lack of alcoholic beverage profits for bustaurants. It will be nearly impossible in most jurisdictions to get a license for a mobile operation. Other permitting issues could get in the way, too. It’s the one area in which brick-and-mortar restaurants, a fixed part of their community, will always have an advantage.