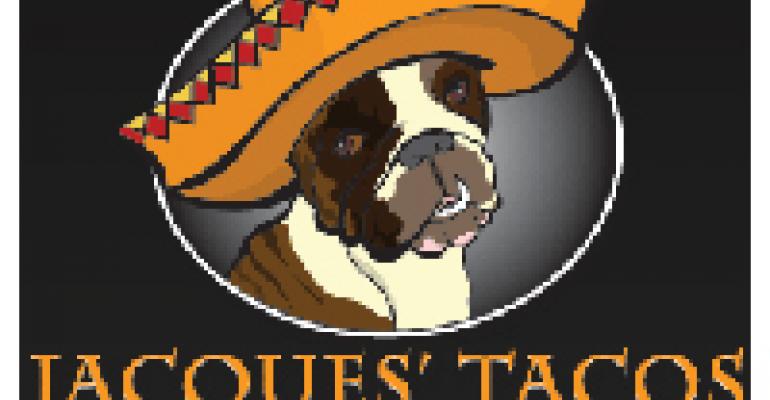 First came the ubiquitous taco trucks and lunch wagons. Next came the Kogi-fueled gourmet food truck wave. Now it’s getting really serious as the chef from a Michelin-starred restaurant has hit the road—in Detroit, no less. Wannabees take note: The barrier to entry to the food truck game is getting steep.

Wesley Holton’s Jacques’ Tacos isn’t just the highest profile food truck in Detroit. It’s also the first, or at least the first one to have both a license and elevated culinary aspirations. It serves a short lineup of gourmet-level tacos that go for $2.50 apiece.

The rest of the menu is stripped way down, as well. Customers can choose one or both of the two a la carte options: 7-Way Smothered Rice & Beans and Jacques Salsa & Crispy Tortillas. Each costs $1.50. Sodas and water also go for $1.50 apiece.

Holton produces this simple and cheap, yet tasty, menu from a self-contained truck. He went with an onboard kitchen setup that enables him to prepare each item to order onsite, avoiding the flavor-killing commissary model most food trucks employ.

How’s he doing? Michiganders, previously shut out of the gourmet food truck game, have turned out in force wherever Jacques’ Tacos has set up shop. The word-of-mouth buzz flowing across social media sites is mostly ecstatic.

These customers don’t know how lucky they are. Los Angeles has an estimated 6,000 food trucks. Michigan has Holton, a Plymouth, MI, native whose last gig was executive chef at the one-Michelin-starred Daniel Boulud Brasserie at the Wynn Las Vegas. Prior to that, he had been sous chef at Boulud’s flagship Daniel in New York City and was opening sous chef at Café Boulud in Palm Beach, Florida. When the Boulud organization decided not to renew its lease at the Wynn, which ran out in April, 2010, Holton returned home to get into the food truck game.

Here’s how Holton felt about it going in:

“Noticing the exploding trend of upscale food trucks popping up in major cities, such as New York, LA and Miami, I realized this venue is just what Detroit needs. Michigan is on the rebound and needs a new elixir in the food scene. So be it—the idea for Jacques' Tacos.

“Fresh at your footsteps I believe you will find Jacques' Tacos to be THE BEST, bar none. They are hand-crafted by a Michelin-starred chef from the finest ingredients. With a tenure of working in New York, Miami, and Las Vegas, I am excited to share my talent and love of food back with my home base.”

Next we’ll find out how well a food truck, even one of this caliber, will fare in the type of climate Detroit endures in the winter months. If anyone can figure how to make it work, a guy with Holton’s credentials can.