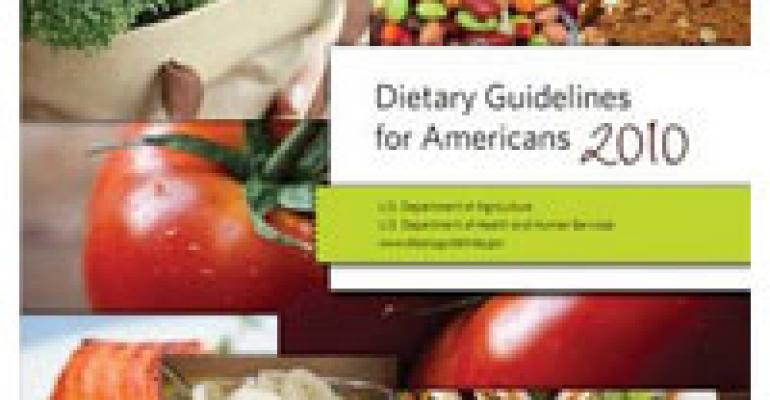 It wasn’t the report’s intent, but customers who adhere to the federal government’s new dietary guidelines will help you cut your restaurant’s food cost and boost revenue in your bar. Finally, the food police are on your side.

Nutritionists, of course, are turning cartwheels over the recommendations made in the Jan. 31, 2011, release of 2010 Dietary Guidelines for Americans (2010 DGA). The document is a joint production of the United States Department of Agriculture and the United States Department of Health and Human Services. It’s meant to reflect current science as it relates to dietary best practices consumers can follow to promote health and prevent disease.

But restaurant operators should be excited, too. The report isn’t another litany of complaints bemoaning the nutritional content of restaurant meals. Instead, the guidelines’ strongest recommendation is simply that consumers should “make half your plate fruits and vegetables.”

“By making an overarching recommendation like ‘half a plate,’ the 2010 DGA provides clearer guidance to Americans that, no matter what their age or calorie intake requirement, everyone needs to strive to have fruits and vegetables make up half of what they eat at each meal,” says a spokesperson for the United Fresh Produce Association.

It’s terrific news for the restaurant industry, where the concept of plate coverage is so important.

One of a chef’s most important skills has been the ability to fill a plate with attractive and tasty components that are inexpensive, while gently disguising the relative size of a dish’s protein component. At 40-50 percent of total plate cost, animal proteins are far and away the most costly ingredient of a typical restaurant meal. Now the government’s telling consumers to stop worrying about how much meat is on their plate and consider instead its fruit and vegetable content, giving particular attention to dark green, red and orange vegetables.

Coming at a time when protein prices have been moving up and are forecast to go even higher, this report is welcome news. There’s no mandatory aspect to these guidelines, but let’s hope customers choose to follow them on their own. You can help by trimming the size of a dish’s protein component, adding a fruit or veggie item to go along with the starch. Then market your meals as “fully compliant with 2010 Dietary Guidelines For Americans.” It’s that rare opportunity for restaurants to do the right thing while cutting costs.

And let’s cross our fingers that customers pick up on this quote from chapter three of the report. The title is “Foods and Food Components To Reduce” and it offers this piece of advice:

Wow, two drinks a day. If consumers follow this guideline, customers will be stacked three-deep at the bar at every restaurant happy hour in America.

Remember, this statement is taken from an official government report that represents the best thinking on health and nutrition. We say highlight this paragraph and post a copy in your bar.

We don’t know how much attention the average consumer pays to government reports like this one. But 2010 DGA contains the best news possible for restaurant owners. So let’s hope it gets plenty of publicity.