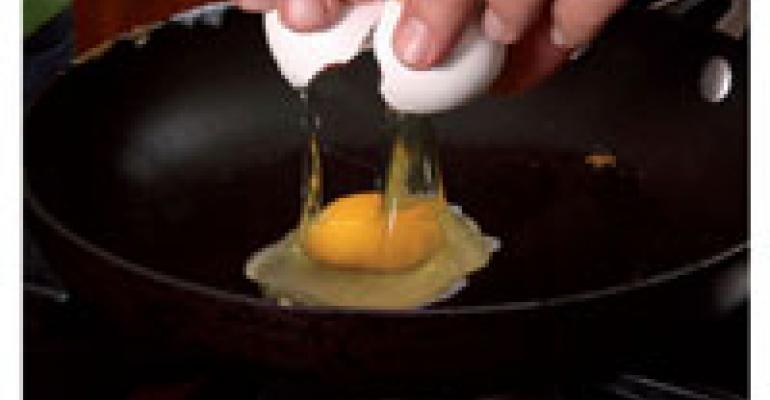 Egg Recall: What Operators Should Know

Guess who is the defendant in the first lawsuit filed in the salmonella egg outbreak? Wright County Egg, primary source of the tainted eggs that have caused a massive nationwide recall of shelled eggs? Nope. It’s Baker Street Restaurant and Pub in Kenosha, WI, one of whose customers ate eggs there and was later found to have contracted salmonella. It’s your business and reputation that’s on the line right now, not just the egg producers

A basic one: with half a billion eggs taken out of circulation already and perhaps more to come, will there be enough safe eggs to go around? There should be. The American Egg Board reports that less than one percent of U.S. egg production is involved in this recall.

Another: Are the eggs you already have in your walk-in, or the ones that will arrive in the next shipment from your distributor, part of the recall? You could figure that out for yourself. Just go to www.eggsafety.org, check out the lengthy array of plant numbers, Julian dates and brand names that indicate recalled batches of eggs and then see if the egg cartons you have on hand are on that list. Or you could get on the phone to your egg distributor and ask what the story is on the eggs they’ve sent you. Egg suppliers are eager to inform customers that they don’t source from known salmonella problem spots such as Wright County Egg or Hillandale Farms.

A third: Should you switch to pasteurized eggs? Options range from multiple varieties of liquid eggs on up to Davidson’s Safest Choice Pasteurized Shells Eggs. As you can imagine, the price and availability of several of these options is in flux right now.

But safety may be paramount. Here’s how Greg West, President of National Pasteurized Eggs, presents the issue.

“National Pasteurized Eggs is very concerned about the recent recall due to salmonella in eggs and the disruption it is causing in people’s lives. The existence of salmonella in eggs in nothing new as salmonella is found inside a small percentage of eggs regardless of their source. People enjoy their eggs in a variety of ways that could possibly expose them to salmonella and any time you handle an egg there is a chance of cross-contamination. Direct exposure or cross-contamination are particularly risky for people with weaker immune systems like seniors and children, diabetics, pregnant women, etc.

“Davidson Safest Choice eggs offer a solution for individuals or foodservice operations that want to manage the risk of salmonella. From an all-natural water bath process, they come from vegetarian hens that are not given antibiotics or hormones. They are safe to eat any way you want.”

The Food and Drug Administration weighed in on egg safety on Aug. 23 with this update:

Wright County Egg has recently been added as a co-defendant in the Baker Street Restaurant and Pub salmonella lawsuit in Wisconsin. We don’t know whether this is a good thing for the restaurant operator or not, but it seems sure that the restaurant will be paying a bundle in legal bills no matter the outcome of the suit. As far as its reputation…would you want to have your life’s savings tied up in this restaurant now?

“These are the states with the fastest reporting systems, which gives the false impression that their states are where the illnesses are concentrated,” says Bill Marler, the plaintiff’s attorney in the Kenosha case. “In reality, there are illnesses nationwide that have yet to be counted. We have been contacted by SE (salmonella enteritidis) victims in states as widespread as Oregon, Ohio, North Carolina and Arkansas. We expect this outbreak to grow.”

Our advice: If you can find eggs you can serve with confidence, buy them.