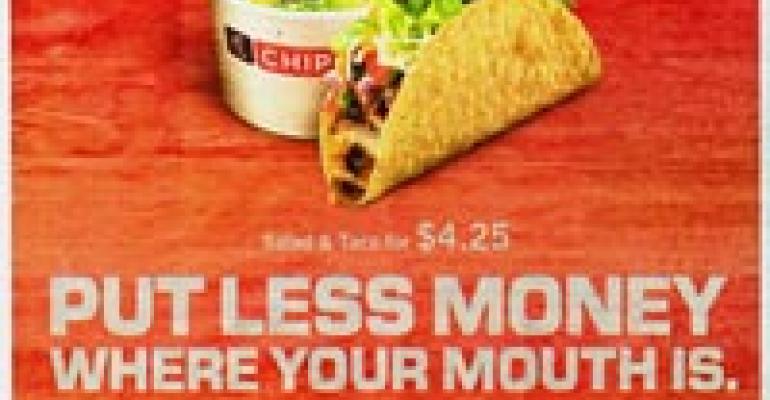 Chipotle on the Cheap

It’s hard to decide which is the better deal for fans of Chipotle Mexican Grill right now. Its food—the company is testing a “Low Roller” menu with inexpensive options starting as low as $2.25? Or its stock—the price spread between the company’s identical-in-economic-value-but-different-in-voting-rights shares (Class A shares were trading around $83 at press time, Class B shares about $66) is approaching historic proportions. Both look like bargains to us.

Even the slumping economy can’t stop Chipotle’s growth. Annual sales at this fast casual segment leader now top $1 billion, its profits rose 47 percent in the most recent quarter and same-store sales went up 2.2 percent in that same period. Few other chains have reported numbers this good as of late.

But then again, few other chains have dared to raise menu prices the way Chipotle has. The company’s year-over-year increase: eight percent. Its prices have gotten so high that, fearful that value-seeking customers might go elsewhere, the company has begun to test a bundle of new menu options, sold at lower price points, in its Denver-area stores.

It’s not a knee-jerk reaction to temporary market conditions. Chipotle has put a lot of thought and work into its test items. Aside from the addition of its no-tortilla “bowl,” Chipotle’s menu has stayed the same for its 15-year existence. If some of these test items go chain-wide, it will be more revolution than evolution.

The Low-Roller menu includes these choices:

• Chicken Taco and Soup—a single chicken taco served with a cup of soup, $4.65.

• Single Tacos—Chipotle has been selling its tacos three at a time; singles are now $2.25.

The menu test has other components. A new “Featured Items” lineup included Chicken Pozole ($5.55), the Omnivore Salad ($5.95), a Classic Burrito ($5.95) and a bowl dubbed the “Carnitavore” that sells for $6.35. The contents of these items are standardized and customers who order them forego the usual Chipotle experience of telling line workers which ingredients to include or exclude in their meal. A three-item kids’ menu that included quesadillas was part of the test, too.

“We have found that many of our customers don’t recognize the variety that exists within our menu, and that new customers are sometimes unsure of what to order,” says Chipotle founder Steve Ells.

How come? We’ll spare you the blow-by-blow, but Wall Street analysts suggest that hedge funds whose exotic trading strategies were designed to exploit the price spread between the two classes of shares have instead caused the spread to grow. Whoever buys the Class B shares today for $66 gets the exact same economic benefits as the person who pays $83 for the Class A shares, only at a huge discount.

So who’s jumping on this too-good-to-be-true deal? The biggest purchaser of Chipotle Class B shares is…Chipotle itself. It’s buying them back hand over fist.

We’re not smart enough to make stock recommendations, but we think you could do worse than to follow Chipotle’s lead here. Even before we find out how the menu tests worked out, this looks like a good restaurant chain to own.