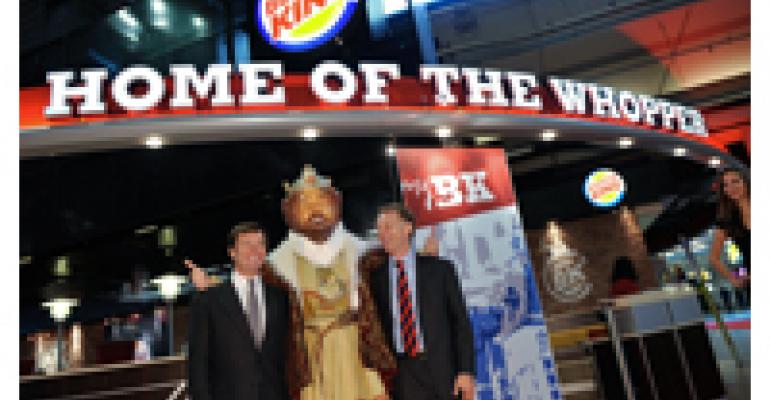 Get in line if you find QSR giant Burger King’s decision to give its brand a fast-casual makeover worrisome. Your full-service restaurant will likely face stronger competition for sit-down patrons as the chain spiffs up its 12,000 units. But the Burger King franchisees that have to install the company’s new “20/20” design are surprisingly wary of the venture, as are the bankers who’ll be lending them the money to do it. Even if 20/20 works as advertised, a back-of-the-envelope calculation makes it hard to figure out how and when a return on this investment will materialize.

It’s no wonder Burger King is looking to revamp its restaurants and, through that, its brand image. Competition is stiff in the burger segment right now—McDonald’s Angus Burgers are doing well and other QSR chains are promoting new items like crazy. On top of that the current “better burger” craze has conspired to make fast casual and full-service restaurants strong competitors for the burger dollar as never before by serving a better product at a higher price point. We can’t imagine what went through the mind of Burger King executives the first time they visited a Five Guys or Smashburger unit.

Or maybe we can, because the 20/20 concept is meant to be their response. Its centerpiece is a sleek restyling of Burger King units that include everything from corrugated metal and brick walls and menus displayed on flat-panel tv screens to red flame chandeliers that rotate. The idea is to morph Burger King from a drive-through spot to a place where patrons will want to come in, sit down and linger. It’s the fast casual model as applied to the QSR burger segment.

Franchisees rave about the new look, which Burger King chairman/c.e.o. John Chidsey says is “contemporary, edgy, futuristic. It feels so much more like an upscale restaurant,” he told the Associated Press on opening day of the first 20/20-equipped unit.

But franchisees aren’t thrilled that they will have to pay for it. Ninety percent of Burger King units are franchised, and franchisees are contractually obligated to refresh their units from time to time. Their prime option now becomes the 20/20 package, estimated to cost between $300,000 and $600,000 per unit.

That would be manageable if the franchisees’ access to credit was the same as that of the parent company. But they’re on their own when it comes to financing. And when potential lenders look at the projected return for this investment, the numbers come up a little short. Considering that many Burger King franchisees own multiple units, it’s no wonder they’re squawking.

Burger King reports that restaurants remodeled to 20/20 standards have seen sales rise between 12 to 15 percent. When you figure how much additional profit this creates on an average annual unit volume of $1.2 million, it’s doesn’t seem like enough to service the debt. Especially when you’re selling double cheeseburgers for $1, as Burger King is right now.

But perhaps the branding effect will make it all worthwhile. “People in the fast-food category are recognizing they’ve been losing customers to the fast-casual player,” says Technomic president Ron Paul. “What this sounds like is an attempt to get that dining-in business back by making it an attractive environment.”

No one can argue with the strategic thinking here. But will the 20/20 initiative work as advertised? We’ll find out a little bit about it when Burger King releases its latest quarterly earnings early next week. The key item to watch is not so much sales in revamped units, but the percentage of business being done in the dining room instead of via the drive-through window. Roughly 70 percent of Burger King’s business currently comes through the drive-through, meaning that a large majority of customers won’t really see the new 20/20 design package, making it difficult to entice them in. You’ll know Burger King’s 20/20 initiative is having the intended effect when dine-in business begins to account for a greater share of overall unit sales.