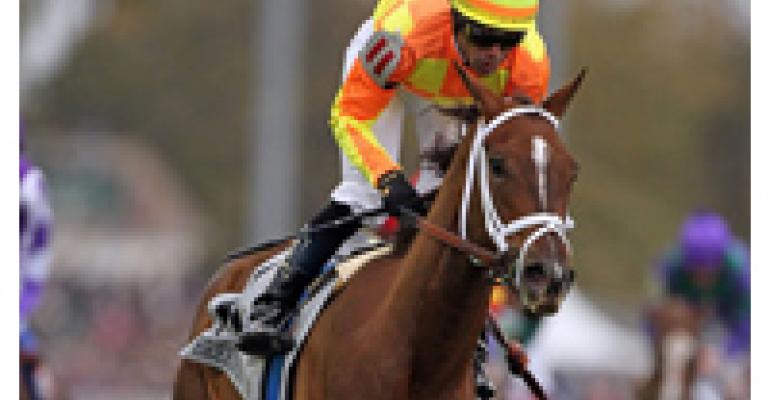 Bobby Flay: Off To The Races

Has any chef ever had a better weekend than the one Bobby Flay pulled off earlier this month? First, his horse More Than Real won the $1 million Juvenile Fillies Turf race at the Breeders’ Cup on Friday, Nov. 5. Two days later, Flay ran the New York City marathon, besting other celebrity participants like Subway diet guy Jared Fogle and rescued Chilean miner Edison Pena by a more than an hour. No wonder so many people want to become a celebrity chef.

The miracle of Flay’s lifestyle is that he has the time and energy to succeed at these outside activities while still busily building out his soon-to-be-six-units burger concept, Bobby’s Burger Palace; overseeing his string of high-profile restaurants in New York City, Las Vegas, the Bahamas and Atlantic City; and fulfilling his nonstop schedule of media appearances. We don’t know how he keeps his culinary skills sharp, but his appearances on Throwdown! with Bobby Flay and Iron Chef demonstrate that he can outcook just about anyone.

It’s a lifestyle that seems tailored for a profile in People magazine, but Flay’s fellow chefs can learn plenty from the way he leverages one activity off of another. You can bet that his big win at the Breeder’s Cup will ultimately translate into plenty of additional traffic to his restaurants, more media appearances, etc.

Flay says he caught the racing bug from his grandfather, who took him to New York City-area tracks Belmont and Saratoga while Flay was growing up. As his restaurants began to make money, he and a partner began to buy horses instead of bet on them.

Flay’s first purchase was a horse called Sophie’s Salad, and his first stakes winner was Gilded Gold in 2005.

That same year, Flay entered Wonder Again in the Breeders’ Cup Filly & Mare Turf. The horse went off as the 6-1 third choice, but finished fourth.

Flay came back in 2010 with More Than Real in the Juvenile Fillies Turf. Ridden by jockey Garrett Gomez, the horse won by two lengths, paying $29.20 to win.

“This is obviously the biggest win I’ve ever had in horse racing by a magnitude of a thousand,” an excited Flay told the AP. “I don’t remember the last sixteenth of a mile because I couldn’t see. Everybody was jumping all over each other.”

More than Real has now raced three times, winning twice and finishing second once. You can see a video of her Breeders’ Cup race at www.youtube.com/watch?v=Pnc9GkaOHHA. Overall this year, Flay-owned horses have raced 31 times, recording seven firsts, five seconds and five third place finishes. That’s a winning rate of 22 percent and an in-the-money rate of 54 percent. If you’re not familiar with racing, this is an unusually high rate of success. Let’s hope he can keep it up, because the overhead is high in the racing game. That’s why racehorse ownership is concentrated among the likes of Saudi princes and old money families. Guys like Flay, who have to hustle to keep the money coming in, are rare.

Two days after the Breeders’ Cup, Flay was back in New York City, toeing the line for the start of the New York marathon. His stated goal was to break four hours, and he came close. Flay’s official time was 4:01.37. The next-fastest restaurant world celebrity was Subway’s Jared Fogle at 5:13. Chilean miner Edison Pena, who jogged nearly the entire 69 days he and his fellow workers were trapped below ground, came in at 5:40.

We don’t know if any of Flay’s fellow chefs can follow in his horse racing footsteps. But you might want to keep your eyes and ears open when you’re dealing with investors. People who pour money into restaurants are gamblers by nature. Maybe they’d like to partner with you on a horseracing venture. Who knows where it can lead?