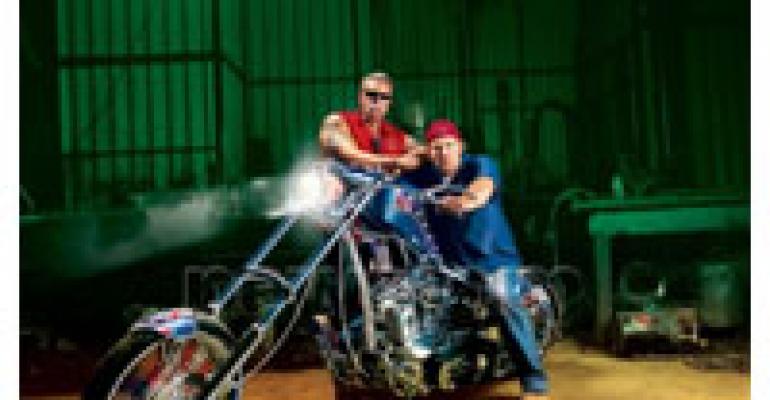 How’s this for high-concept: Feuding reality TV motorcycle-building family hires two-Michelin star chef to create menu for a restaurant with 165 beers on tap. That’s what’s set to happen this summer when the stars of American Chopper open Orange County Choppers Roadhouse in Newburgh, NY, with a lineup of American-style comfort food created by chef Christopher Lee. Who wouldn’t go see what this place is like?

You wouldn’t think the kitchen skills of Lee, a Beard Award winner whose full-time gig is executive chef at Aureole in New York City, would be needed to draw customers to Orange County Choppers Roadhouse. The TV fame of the proprietors alone should be more than enough to fill the restaurant’s 225 seats on a nightly basis.

Paul Teutul Sr. and Paul Teutul Jr., owners of custom motorcycle manufacturer Orange County Choppers, have starred in long-running cable reality show American Chopper since it first aired in 2002. The show originally appeared on the Discovery Channel, moving to TLC in 2007. American Chopper is primarily about building exotic motorcycles, but acquired a more dramatic dimension when Paul Sr. fired Paul Jr. in an April 2009 episode. Reconciliations attempts did not succeed. Paul Jr., owner of 20 percent of the core enterprise, is now starting a motorcycle business of his own. But the show rolls on. It’s carried in 162 countries (35 different languages) and Paul Teutul Sr. recently signed a contract to do four more years worth of shows for TLC.

Why a restaurant now? In addition to being metalworking geniuses, the Teutels have always been strong on the ancillary ventures front. They’ve peddled merchandise on QVC, appeared in Jon and Kate Plus 8 and My Name is Earl and even shown up in Nickelback music videos. Now they’ve hooked up with Advent Entertainment, who will operate the roadhouse project under license from the Teutels.

“We’re thrilled to partner with global phenomenon Orange County Choppers and Paul Teutul Sr.,” says Advent Entertainment chairman Mark Advent, the founder and creator of New York New York Hotel & Casino Las Vegas. “American Chopper is one of the most popular reality shows in the world, and we are creating an international entertainment, leisure and lifestyle brand to be enjoyed by people of all ages, food and beer aficionados, concert-goers, motorcycle enthusiasts, sports fans and night-life revelers.”

So what will Lee, who earned two Michelin stars last fall while at Gilt in New York City, add to the mix? The Advent people say the idea is to serve “all-American classics including the best fried chicken in America, custom burgers, traditional macaroni and cheese, pizza and many of the chef’s surprise Orange County Choppers Roadhouse customized culinary creations.”

“I am a huge fan of Orange County Choppers and have watched the TV show since it started,” Lee says. “I love the idea of creating a broad menu that is delicious and which has mass appeal for this exciting entertainment and leisure-driven concept.”

Advent’s long-range plan for the Orange County Choppers Roadhouse calls for units in Miami, Orlando, Las Vegas and Dubai, with a casino tie-in some markets.

It seems like a great opportunity for Lee. Among other things, the Roadhouse’s location, 60 miles north of New York City, puts it in the prime artisanal and boutique-farming belt that supplies the city’s farmer’s markets and upscale restaurants. We can’t wait to see what kind of a menu a guy with Lee’s sensibilities puts together for this project.