It's not every day that a hotel opens in what used to be a school, but that’s what The Slate Hotel has done in the four-story 135,000-square-foot space in Downtown Denver that used to be the Emily Griffith Opportunity School. Its restaurant, Teachers’ Lounge, pays homage to the building’s past, although the space is way more refined than where teachers typically go on breaks.

Guests of the hotel and the restaurant can see traces of this almost 100-year-old school in the wide open hallways, sturdy metal doors, and original stairwells. The restaurant and bar are located on the main floor in an open space that gives diners a view of people clicking by in the vast "hallway."

Chef Michael Poompan oversees the new American menu at Teachers’ Lounge, and he sources a lot of meats, cheeses and produce locally, such as the mortadella from River Bear American Meats in the fried "bologna" sandwich, and the bison short rib that are served with grits,

Owners Andy Bruch and Dan Phelps (whose brother Denn was also an owner but recently passed away) had Point Easy in the works for more than a year until it finally opened in June. Phelps said the idea was to make a space that was easy to dive into, but with elevated food focused on local ingredients. To note, the Cure Salad, pictures which features a greens mix curated exclusively for the restaurant by a Boulder farm.

Built inside a stunning brick building in Denver's Whittier neighborhood, Point Easy blends modern design with a nod to the space’s heritage. The intricate brick façade showcases the unique original design, and the patio off to the side matches the atheistic. Once inside the space becomes modern. There are bright white tables, a geometric ceiling highlighted with floating circle designs and a crisp but comfortable vibe.

The late chef Denn Phelps created the menu, which is a well curated list including house-made pasta, large plates showcasing Colorado ranches, smaller plates, and a cheese and charcuterie section. Think items such as chicken liver pâté, a large pork chop over greens and grits, agnolotti laced with wild mushrooms, and chocolate tart topped with fresh cherries. A tasting menu is available, too.

The first Denver location of this 100-percent plant-based burger spot recently opened near the University of Denver. The 40-seat fast-casual space is decked out with vibrant colors and reclaimed wood, and there's a patio with additional dining space. There aren't a lot of vegan restaurant options in the Mile High City, and none that are fast-casual like this.

Classic cheeseburger at Next Level Burger

All the food on the menu sounds like a classic burger joint, but there are no animal products involved. The signature burger is made with a craft blend of organic mushroom and quinoa to form the patty, then topped with organic avocado, a plant-based version of cheese and eggless roasted garlic-thyme mayonnaise. Not every burger has the same patty. For example the chipotle burger patty is made with black beans and veggies. There are also vegan shakes spun with organic, house-made soy or coconut soft-serve ice cream.

In late June the team behind The Bourbon Group in Salt Lake City opened their fourth spot, Franklin Ave. Cocktails & Kitchen. Like the group’s other restaurants, this space is dedicated to whiskey and foods that pair well with it. Due to the liquor laws in Utah, no one under the drinking age is allowed to enter.

Like the other restaurants run by this group, Franklin Ave. is in a part of town not widely populated by other dining venues, yet. The idea, said co-founder Jason LeCates, is to bring life back to places in Salt Lake City that have been neglected. This spot is located in an alleyway that used to house brothels. The actual bar is inside the short-lived Franklin Avenue Variety Theatre, which was built around 1891. These historical aspects can be seen in the facade and Old West saloon-style decor.

While the Bourbon Group specializes in whiskey, it also showcases good food, including seasonal and items when they can get them. It's modern American fare with items such as mushroom beignets, wagyu steak with broccolini and taleggio cheese crema, duck ragù over pasta and cauliflower steak with pistachio butter.

Chef Angelo Sosa's anticipated eatery Tía Carmen opened in May in the JW Marriott Phoenix Desert Ridge Resort + Spa. Named after the chef's aunt, the restaurant showcases foods, farmers and the landscape of the Southwest, with a strong bent to Sosa's own Latin heritage.

At the end of May, chef Tal Ronnen launched his plant-based fine-dining restaurant and fast casual concept in the Resorts World Las Vegas. Chef Ronnen's original restaurant is in Los Angeles, but now diners in Nevada can indulge in a meatless Italian-Mediterranean-inspired menu at Crossroads Kitchen.

On the casual side, Crossroads Burgers offers diners an array of vegan dishes with a diner flair. That includes house-made plant-based sausages, burgers, nuggets and a non-dairy sundae. The idea, Ronnen said, is to make eating plant-based foods approachable and easy. 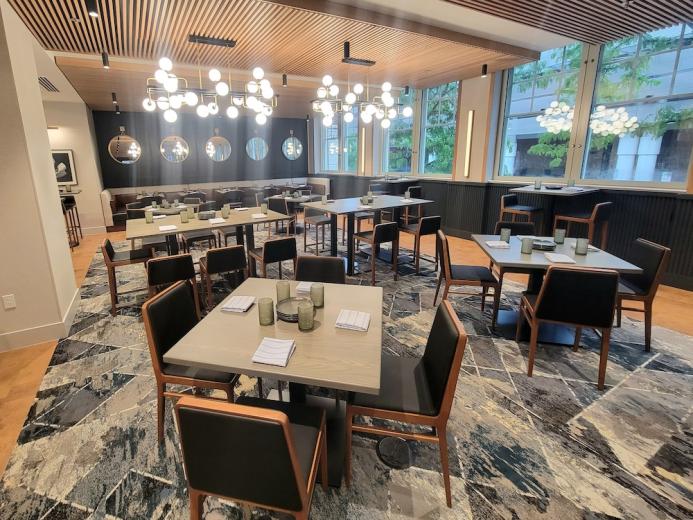