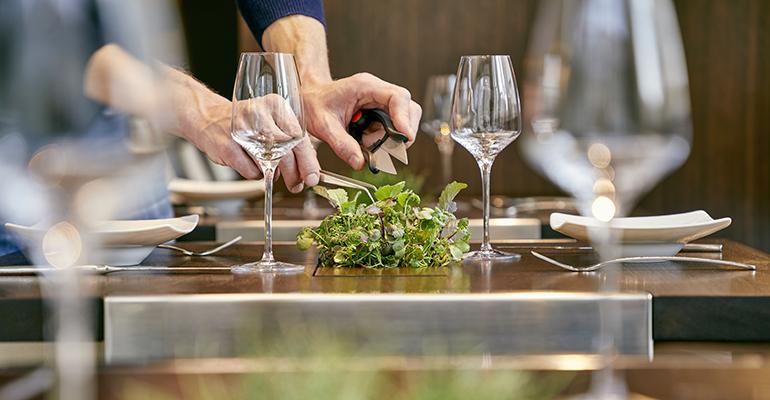 You’ve heard of farm-to-table. In Chicago, the recently debuted restaurant Temporis takes the notion to a new level with the farm on the table.

The 20-seat restaurant, which opened in January, features custom-built tables. At the center is a trap door into which the restaurant staff inserts live plants, grown hydroponically, which are snipped by servers directly onto guest plates.

“It really wasn’t intended to be a gimmick,” said Sam Plotnick, co-chef with Evan Fullerton. “It becomes a fun, interactive component to the menu and I think people like knowing where their ingredients come from. And there’s just such a difference in taste when something is that fresh and still alive.”

The plants begin their lives in the restaurant’s basement.

Temporis uses a soil-free hydroponic system with full-spectrum grow lights on a 12-hour cycle. The restaurant offers only a tasting menu, which varies, and seeds can be cultivated to support the specific dishes planned.

For a rabbit dish recently on the menu, for example, Temporis grew mustard greens, as well as a type of Chinese cabbage and radish greens for other dishes. “They grow fairly quickly, so you can seed them and, in eight days, they’ll be ready for that night’s service,” said Plotnick.

Temporis is also growing other microgreens, opal basil, dill or micro scallions — though some plants don’t make it to the table centerpiece, they’re still used in the kitchen, he said. Down the road, Plotnick plans to grow things like edible flowers, cherry tomatoes and even strawberries.

The plants are grown on sterilized burlap sacks, which the restaurant gets from its coffee supplier. The burlap is soaked in a nutrient-rich solution and serves as a base for the roots.

When ready to use, 3.5-inch by 3.5-inch squares of burlap with plants embedded can then be cut and placed directly into the tables each night for service.

“We’re ordering seeds now for menus further out because we want to play with new ingredients,” Plotnick added. “That’s the beauty of having a 20-seat restaurant, because it allows you the flexibility to evolve your menu.”

Temporis is the first restaurant for Plotnick and Fullerton. The menu is contemporary American, said Plotnick.