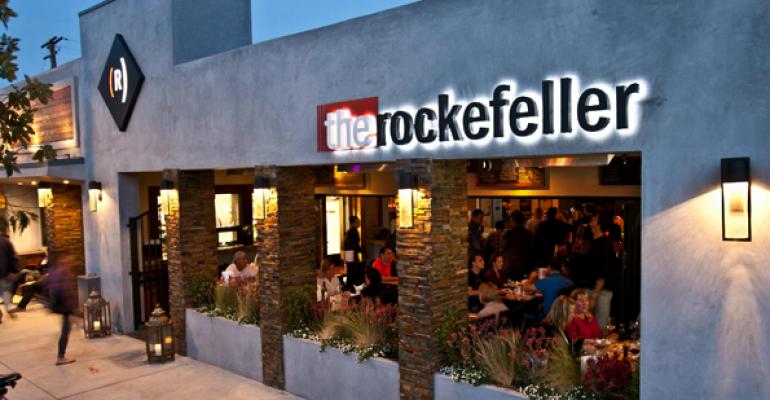 Thinking small pays off for one gastropub concept

A gastropub concept with a small footprint is finding success in L.A.’s South Bay neighborhoods.

The Rockefeller first opened about four years ago in Hermosa Beach, is about 2,400 square feet. A second location with 1,500-square feet opened in nearby Manhattan Beach just under two years ago.

Now the company is looking for a third location in Redondo Beach, to make a “beach city trifecta,” says Chaz Gaddie, the brand’s director of operations.

Created by Allen Sanford, cofounder of digital concert guide LiveList and founder of the Hermosa Beach music venue Saint Rocke, The Rockefeller taps growing interest in craft beers in a neighborhood pub setting with a menu that leans toward comfort foods.

The restaurants have 20 to 25 handles of beer on draft and the menu is “cook-driven,” as opposed to chef-driven, Gaddie said.

There’s an emphasis on seasonal ingredients, but the main drivers are items like the Rockefeller Burger, made with American wagyu beef, truffle bacon jam, tomatoes, frisée, teleggio cheese and garlic aioli; truffle macaroni and cheese; and a lobster pot pie.

Burgers are 99 cents on Tuesday nights and oysters are a $1 on Mondays, deals that tend to introduce new customers to the brand and drive early week traffic.

The average check is around $20.

“I would rather have a smaller space that, when half full, looks half full rather than a larger space that would look half empty,” he says.  “We do very well. Unless you’re a big corporation, you have to be wise about space. What happens to a lot of people is you end up working for landlords. Rents are not subsiding.”

He’s hoping to grow the brand within Southern California to prove it out before moving to new markets.

Gaddie previously developed South Bay concepts like Fritto Misto, Coyote Cantina and Bamboo Café & Lounge. A strength of The Rockefeller is the management team’s familiarity with the South Bay community.