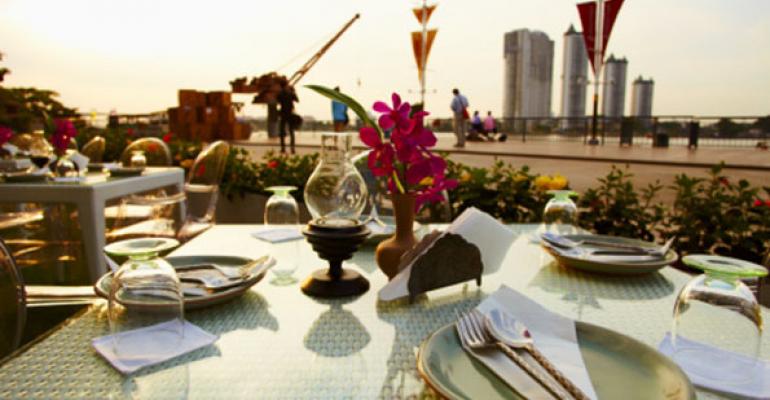 Urban planners take note: A multitude of factors combine to make cities dynamic and certain neighborhoods hip. But city dwellers surveyed by international architecture/design firm Sasaki Associates agree on the two elements that matter most: restaurants and food. Maybe it’s time developers start wooing restaurateurs to new projects instead of the other way around.

Boston- and Singapore-based Sasaki has global master planning experience on projects big (the Beijing Olympics) and small (downtown Rochester, MN). For this study, the firm surveyed people who both lived and worked in one of six U. S. cities: Boston, Chicago, New York, Austin, San Francisco and Washington, DC. Respondents were asked what they liked and didn’t like about their place of residence.

Their likes: great food, waterfronts and historical architecture. Cities either have or don’t have these latter two items. But restaurants? That’s something urban planners can easily add to the mix.

How important are restaurants and food?

“Since the dawn of time, we’ve come together for meals—so it’s no surprise that food continues to be a major social, cultural and economic driver,” the study’s authors note. “When we asked city residents what aspects of urban life enchanted them, food kept popping up in their responses. Eighty-two percent of urbanites appreciate their city's culinary offerings.”

Here’s what Sasaki suggests developers and planner can do to leverage this strong preference.

“There are myriad ways in which we can incorporate food into our cities, from traditional restaurants and waterfront patios to, more recently, food trucks and carts. We can activate streets by accommodating the mobile food scene. This usually requires making room for trucks and, ideally, providing seating options. At the district scale, we can plan for and incentivize food and beverage ventures in new or revitalized neighborhoods. Recognizing the powerful draw of food, cities should plan and design accordingly.”

These conclusions are music to a restaurant owner’s ears. If planners take Sasaki’s idea to heart, no longer will operators have to battle for startup capital, wrangle with landlords to get an affordable lease on a desirable site, and then jump through hoops to acquire necessary permits and licenses. Instead, the developer will provide incentives and other entities will pitch in.

Seem like a pipe dream? An effort like this is already under way in Evansville, IN. The Southwest Indiana Chamber is running a contest, “Evansville’s Main Course Restaurant Challenge,” designed to lure a new restaurant to a prominent corner of the city’s downtown. The prize: an incentive package worth more than $250,000. City fathers are encouraging “already-successful restaurateurs and entrepreneurs with interest, and the ability, to establish a new eatery in downtown Evansville” to apply.

The winning concept will be expected to have a bar and serve lunch and dinner. The location is the corner of Fourth and Main in downtown Evansville. The Chamber say it’s a high-visibility site whose building, a former jewelry story, has an open and flexible floor plan. The renderings that accompany this story give an idea of what contest backers are looking for and what some possibilities might be for this site.

The entry deadline is Oct. 15, 2104 and the new restaurant must open for business no later than Sept. 1, 2015. Contest details and entry links are here. Let’s hope plenty of operators show interest and other planning entities, both public and private, follow suit on the incentive idea.