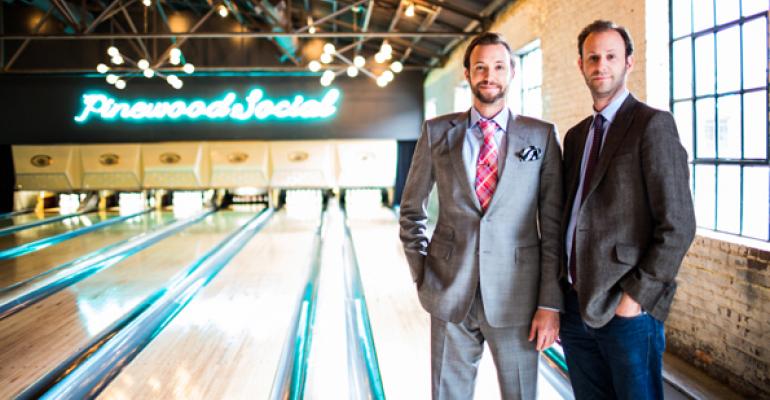 Strategic Hospitality is on a roll

Last fall, Restaurant Hospitality issued its list of “The Coolest Multi-Concept Companies in the Land,” and on that list was Nashville-based Strategic Hospitality, run by two young dudes who have demonstrated a fearless disregard for the failure rate of restaurants in this country. Good thing, too, because brothers Ben and Max Goldberg have slowly and steadily demonstrated that they’re in it for the long haul and they’re going to throw down with the best in the business.

The truth of this aforementioned point comes on the heels of their latest project, Pinewood Social, a 13,000-square-foot complex that features a coffee house, a casual restaurant, a bowling alley, an outdoor pool area and a whole lot more. Never mind that there’s nothing quite like this in Nashville; there’s nothing quite like this in the country. To say this project is ambitious would be the understatement of the year.  Yet the Brothers Goldberg do not blink.

Perhaps their confidence comes from their exceptional accomplishments. They are the brains behind The Catbird Seat, a 32-seat temple of fine dining that was on every critic’s list of the best new restaurants in America a few years back. Catbird is located on the second story of a building that also houses Patterson House, a swanky speakeasy on the first floor. It, like Catbird, is considered at the top of its class among restaurant critics and fans who appreciate the finer things in life like a finely made cocktail. Before Catbird and Patterson, the Goldbros proved they could deliver a one-two punch with Merchants, a restaurant with a casual setting on one floor and a fine dining restaurant on another. And lest they be pigeonholed, they followed that up with Paradise Park Trailer Resort, a full-blown honky-tonk for some serious shit-kicking fun. Pinewood, their latest project, signals that the brothers are headed in a decidedly casual direction, not unlike so many other restaurant operators around the country who have put fine dining in their rearview mirror.

According to the Goldbergs, Pinewood Social was created from the idea that people need a place to gather morning, noon and night. And that’s just how customers have reacted: meeting for coffee in the morning, sometimes arriving for a casual lunch or doing it up big time with cocktails and dinner. Surround all that with plenty of fun activities, and Pinewood has all the bases covered.

The overall space itself is a converted trolley bar, which has been divided into four distinct areas—a coffee shop, a casual restaurant, a cocktail bar and an activities area, which includes a six-lane bowling alley reclaimed from an old Bowl O’ Rama in Indiana. You’ll also find a karaoke room, which can handle groups of eight or less and doubles as a private meeting room. In either case, servers deliver food and drink to this private space. All of these areas flow from one to another and eventually spill out to the outdoor swimming pool, which also features seating for the restaurant, a bocce ball court and ping pong tables. A converted Airstream serves as a bar offering cocktails.

The menus at Pinewood were created by Josh Habiger, who most recently strutted very high-end stuff at Catbird Seat. At Pinewood the focus is on a more grounded American comfort food menu, featuring generations-old recipes like pot roast, mushroom pot pie and fried chicken. These homespun dishes are available in larger formats for family-style dining. But because this is an all-day sort of place, Pinewood’s menu caters to all dayparts. Customers can, for example, order a Reuben Benedict for breakfast, a smoked-trout omelet for brunch, a pork belly salad for lunch and a grilled pork chop for dinner.

Strategic Hospitality is so deep with talent that it’s using its best players to ensure Pinewood’s success. While Habiger arrived from Catbird to create Pinewood’s food, the Goldbergs have brought Matt Tocco over from Patterson House to create a bar program that includes cocktails, craft beers, punches and a large selection of bourbons. For a bit of showmanship, bartenders hand chisel ice for each cocktail off a 300-pound block of ice in front of customers. We don’t know what Tocco has been smoking, but we dig the names of his cocktails, which include He Who Shall Remain Nameless, The Bitter Wife, More Heart than Brains, Memory County Jail and The Honesty of Constant Human Error. As fun as these names are, they signal to the public that Pinewood can deliver high-end cocktails like Patterson House, but in a more relaxed and casual setting.

The overall look of the place comes from a New York design team that successfully attempted to capture the essence of midcentury Americana, but with a considerably hipper attitude. A common theme is exposed brick painted in cream with high ceilings that feature barn wood, bowed steel trusses and a chandelier designed specifically for the space. To offset the roughness, the floors are polished concrete tinted charcoal color.

Because Pinewood has the heft of a hotel, hotel-like touches were employed. As guests walk in, they follow a hexagon tile floor to a handcrafted reception desk. From there a host or hostess guides them to their chosen destination. To the left of the reception desk is the coffee area, anchored by a white marbled coffee bar. Just steps from there is a living room-like space that features low-slung distressed leather couches, chairs and ottomans. Custom-made coffee tables help anchor this space. You’ve never had it this good drinking coffee at Starbucks.

Just beyond the coffee bar/living room is a 10-seat communal table and a four-sided solid copper cocktail bar that seats 30. This cocktail area also features tan oversized wax canvassed banquets. A wall with five vintage iron-glass windows separates the bar and adjoining restaurant from the bowling lanes. Guests eating or enjoying cocktails can view the bowling action without hearing the explosion of ball against pins.

In the hands of amateurs, this mix of so many uses could be a clustered disaster, but the Goldbergs have once again demonstrated that the future belongs to the bold, the brave and visionaries with a smart, adventurous plan.