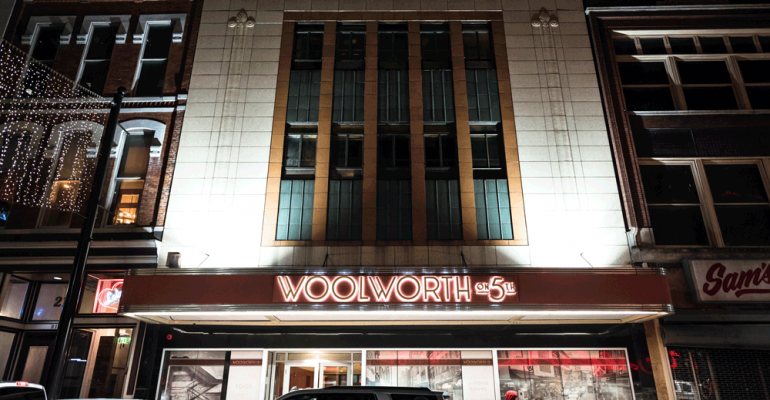 Woolworth on 5th in Nashville revisits a timeless message of change

You can teach people about the past. Or you can let them see it, taste it and even hear it.

That’s the thinking behind the restoration of the former F. W. Woolworth store in Nashville, a “five and dime” that originally opened in 1930, but where civil rights protesters in the 1960s staged lunch-counter sit-ins and helped usher in a new era of desegregation. On Monday, the former store reopened as Woolworth on 5th, the latest restaurant concept in the TomKats Hospitality Group, which specializes in converted historic locations in Nashville.

But, when it came to reviving the Woolworth building, it was about more than just recapturing the historic beauty of a structure. It was about telling the story of what happened there, said Tom Morales, TomKats’ founder.

“Today, it’s more relevant than ever,” said Morales. “What we’re trying to do with the restaurant is to take what [the protesters] did and why they did it, and for that to become the soul of what we’re doing. We want to become a welcome table for everybody.” The goal of the concept is not to hide history or to become a museum, he added. “We’re trying to be the change.”

The three-daypart menu, developed with executive chef Matt Farley, is decidedly Southern, but with updated twists to spotlight the ingredients and techniques that came from around the globe, from North Africa to South America.

A casual lunch menu, with items ranging from about $8 to $14, will feature classic fried chicken with green beans and mac & cheese, but also not-so classic items such as lamb meatballs with fennel-mint chutney, and a squash fritter po’ boy with sautéed onions, peppers, pickled scallions and black-bean spread. Space on the restaurant’s mezzanine level offers a separate menu with dishes for sharing, such as a duck-confit quesadilla or Low Country shrimp boil with andouille corn salad and whole-grain mustard rémoulade.

The bar menu evokes the space’s past life as a soda fountain, with cocktails like the Fifth Avenue Fizz, with vodka, lime, simple syrup, bitters and soda; as well as both alcoholic and no-alcohol milkshakes and floats.

The New Era Ballroom in the building’s basement is scheduled to open in March and will feature live music and performance programming. The house band, the Downtown Dippers, will perform weekly, and the space will also host poetry and “cultural exploration” led by Nashville actor, playwright and director Barry Scott. At some point, what was F.W. Woolworth was converted to a Dollar General store. With help from architectural firm Tuck Hinton, what could not be preserved within the building was recreated to evoke the original space.

For example, the terrazzo floors were restored, with intermittent concrete bands that laid beneath the store’s merchandise display counters. The Art Deco-inspired dining booths are matched with the more-modern aluminum signage that runs the length of the bar on the main level, in the style of the lunch counter.

“We recreated the lunch counter as it was from old photos,” Morales said. “It’s probably about 98-percent accurate.”

Within the South, Nashville has long been a forward-thinking town when it came to race issues, said Morales. It was the first city taken by the Union in the Civil War, and it is home to a number of historically black colleges and universities. In the 1960s, Nashville was home to a vibrant African-American music scene, with roots in soul music. Morales hopes Woolworth on 5th will help teach a new generation what peaceful protesters went through to effect change.

“Students were beaten. They had cigarettes put out on them, and syrup was poured on their heads. But they were very well trained, and they had a purpose,” he said.

“We’re bringing it to life. People want to sit where these people sat. It’s emotional,” said Morales. “There are a lot of things we can grab hold of and educate people without being a museum or without necessarily preaching.”