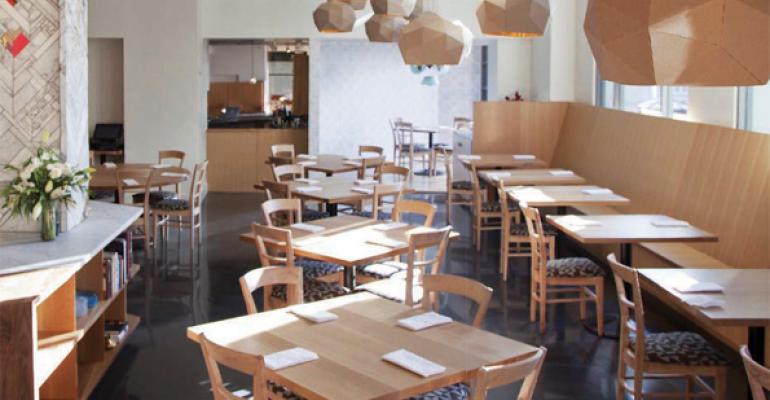 When Jason Stratton announced he’d be opening a Spanish restaurant in downtown Seattle, he surprised more than a few observers of the city’s dining scene. For one, downtown Seattle has hardly been a hotbed for ultra cool restaurants. Two, despite the city’s cultural diversity, Spanish cuisine has had little representation. But Stratton’s build-it-and-they-will-come approach has worked with his two other successful restaurants, and he’s betting it will work again with Aragona.

His ace in the hole is chef de cuisine Carrie Mashaney, who competed admirably on the most recent and 11th season of Bravo’s Top Chef New Orleans. Her finesse, skill and likeability on the show won her a legion of fans. Her appearance also demonstrated that no matter the challenge, she has the chops to pull it off. Thankfully, in the real world of cooking, Mashaney didn’t have to quickly interpret Spanish cuisine in a swamp without a stove under the glare of three celebrity chef judges. She and Stratton spent time in Spain exploring the cuisines of Catalonia, Valencia and Andalucia. Add to that Stratton’s time living in Spain, and Aragona has evolved as a fully realized contemporary vision of Spanish cuisine. Of course, Mashaney is primarily using the products of small local farmers and artisans.

“We start with a very traditional dish from the countryside and riff on it depending on what’s in season; or perhaps we do a very straight read on it, while refining it in a way,” he explained.

Rice is a focal point of the menu, and dishes incorporating the ingredient come closest to the classic dishes of Spain. A menu standout is Rice with Squab, Empeltre (Spanish black olives) and Kohlrabi. Another is Black Rice with Squid Meatballs, Baby Turnip and Ink Meringues.

Mashaney is employing a variety of cooking techniques, including the use of a plancha, a cast-iron griddle surface. Griddled items include  Spot Prawns and their Roe with Cider Vinegar and “Grilled” Cauliflower with Toasted Garlic and Moscatel Vinegar.

Master Sommelier Chris Tanghe has created a Spanish wine list that marries beautifully with Mashaney’s food, while David Nelson is behind the cocktail list. Crafting the desserts is Clare Gordon.

Aragona, named for Spain’s Aragon region, has 55 seats in a main dining room that includes a dining counter that oversees the open kitchen. The visual showpiece of the space is a mosaic-tiled column created by internationally recognized Seattle mosaic artist, Kate Jessup. Surrounding the column is a central service table used to decant wines, carve ham and portion out rice dishes. There’s additional bar seating for 45 guests and an additional 25 seats in a private dining space. Eating at Aragona feels as if you’re in Madrid, Barcelona or Valencia.

Stratton’s other restaurant, Spinasse, opened in 2008 and features authentic dishes from Piedmont, including hand-made pastas. It was named one of Seattle’s Best Restaurants in 2009 by Seattle Metropolitan magazine. In 2011, he opened a more casual, version of Spinasse called Artusi.

Mashaney served as the chef de cuisine at Spinasse for Stratton, whom she met when they were both working at Café Juanita. It was Stratton who encouraged Mashaney to try out for Top Chef.

“I had no idea what I was going into,” she told the Seattle Times. “...I didn’t expect to be as nervous as I was.”

At Aragona, she’s got nothing to be nervous about. Stratton’s got her back and the foodies in Seattle have welcomed her with open arms. Ole!