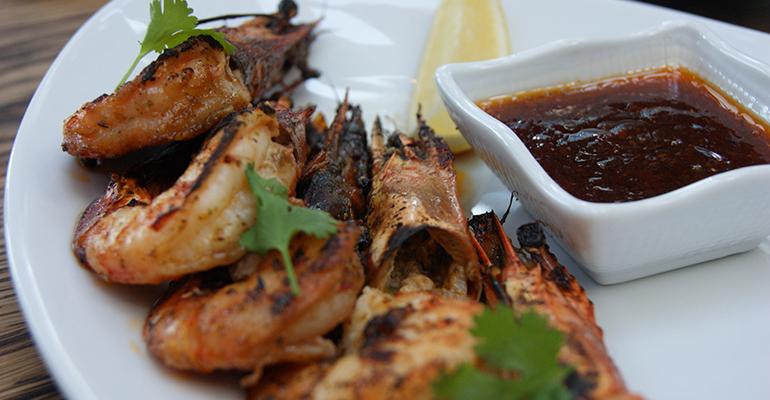 When it comes to teppanyaki, most American diners think of Benihana. But Los Angeles-based Innovative Dining Group hopes to change that perception with its new ROKU concept.

Opened in November, in an 8,000-square-foot space on the Sunset Strip in West Hollywood that once housed IDG’s RivaBella, ROKU is a hybrid that combines elements of the group’s original Sushi Roku concept with an all-new teppanyaki component that will attempt to up the ante on Benihana, says Lee Maen, a partner and founder of IDG.

“Benihana has a great concept, but it’s changed over the years and it’s not a place I want to go to anymore. They throw stuff at you,” says Maen. “We do a similar concept, but on a much higher level, with better ingredients, less oil and butter. The chefs still do a show, but they won’t throw things at you.”

Like Benihana, ROKU’s teppanyaki guests gather around the teppan grill and a chef cooks to order at the table.

But at ROKU the ingredients will be more high end, including A-5 Japanese wagyu, dry-aged prime New York steak, lobster tail with uni butter or filet mignon with foie gras and truffles.

The teppanyaki dinners range in price from $46 for Faroe Islands salmon to $120 for the wagyu, and include a mushroom consommé, kale salad, seasonal vegetables and rice. Available with the various proteins are dipping sauces, like miso mustard ginger and truffle chimichurri.

In another section of the restaurant, a sushi and omakase menu is available with some classics from the original Sushi Roku, which closed earlier this year, though IDG still operates five newer Sushi Roku locations in Southern California, Las Vegas and Scottsdale, AZ.

The original Sushi Roku, which was the group’s first restaurant when it opened 18 years ago, needed updating, Maen explains. Because it was physically so close to the planned ROKU, the group decided to incorporate Sushi Roku into the new concept as a next generation for that brand. ROKU’s menu serves as an innovation hub to test dishes that may be translated to other Sushi Roku locations.

“About half of ROKU’s sushi menu is favorites from Sushi Roku,” says Maen. “But the other half is this innovative menu with new ingredients and different ways of doing things to push the envelope.”

Like most IDG concepts, the bar is also a key element for ROKU, Maen says. “We spent a lot of time on mixology here. The drinks are really amazing and they’re fun and wide ranging, so there’s something for everyone.”

Examples of cocktails include the Silent Smoke with El Silencio mescal, yuzu, agave, fresh grapefruit and black sea salt; or the Pacific Scorpion with a signature in-house infusion of Svedka, along with Svedka clementine, coconut, pineapple, passion fruit, watermelon, guava and lychee, served in a glass bowl with a bamboo straw.

The restaurant boasts nearly 20 Japanese beers, and also has a wide selection of Japanese whiskies.

“We’d like to become the biggest buyer in Los Angeles of Japanese whiskey, but we’re not there yet,” Maen adds.

Typically IDG multiplies its concepts. The group’s BOA Steakhouse, for example, has two locations in the L.A. area, as well as Abu Dhabi, with a variation at Los Angeles International Airport. The concept Katana, likewise, is in West Hollywood and soon to open in Dubai.

It remains to be seen whether that will be true for ROKU, says Maen.

“If this ROKU takes off like we think it might, it will be a strategic thing and we’ll have another concept in our arsenal,” he explains. “But it wasn’t developed to roll out everywhere.”