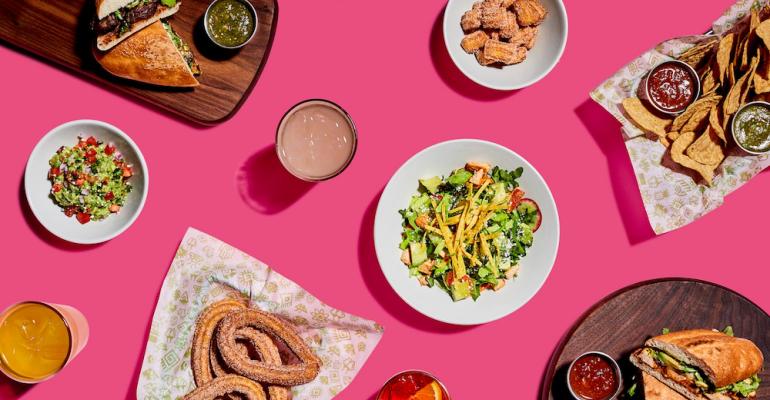 Chicago chef and restaurateur Rick Bayless has announced plans to expand his Tortazo restaurant to New York City and has named Sam Lipp president of the concept, a fast-casual brand focused on tortas — a type of sandwich served on flat telera rolls that are popular in Mexico.

The first location opened in January in Willis Tower in Chicago, serving griddled tortas, as well as Mexican-inspired bowls, soups, salads, sides and desserts, mostly to go, which proved to be lucky as the pandemic struck, Lipp said.

Lipp, an operations veteran of Danny Meyer’s Union Square Hospitality Group and Make it Nice, which operates Eleven Madison Park, joined Bayless’s team a couple of months ago after consulting with them on expanding to New York’s NoMad neighborhood. The new location is slated to open in September.

Although “tortazo” is Spanish slang for a slap or a smack, Lipp says the name actually comes from the restaurant’s signature menu item and the suffix “azo,” which adds weight or significance to something.

“The best example I can give is if you’re ever watching a soccer game [in Spanish] and someone scores a goal, you hear ‘Goalazo!’” Lipp said.

He said the new concept is an opportunity for Bayless to bring his love for Mexican cuisine and culture to a broader audience.

Lipp said the new location will incorporate new features based on learnings from the pandemic, such as a self-ordering kiosk. Guests will be able to order online for pickup or delivery, and in-person from humans as well. Table service also will be offered with QR codes at tables both indoors and outside through which guests can view menus, order and pay. Food will be brought out on china by food runners who will also be able to take orders for more food or drinks.

Lipp said the New York location of Tortazo will likely have items not yet available in Chicago, like a tlayuda — an increasingly popular item in the United States that resembles a very large, pizza-like tostada brushed with refried beans and topped with meat, cheese and vegetables. Lipp said that since September is still tomato season in New York, the opening menu might include an avocado BLT tlayuda.

Other happy hour-friendly shareable items such as quesadillas will likely be on the menu, too, he said, and possibly ceviche.

The restaurant will have around 30 seats inside with an 8-seat bar as well as seasonal outdoor seating.

Lipp said the average transaction at the Chicago location of Tortazo is around $19, and he expects it will be similar in New York, with items starting in the $10 or $11 range.

He said that no new Tortazo locations were likely to open this year, and any medium-term expansion would likely be in the existing Chicago and New York City markets.