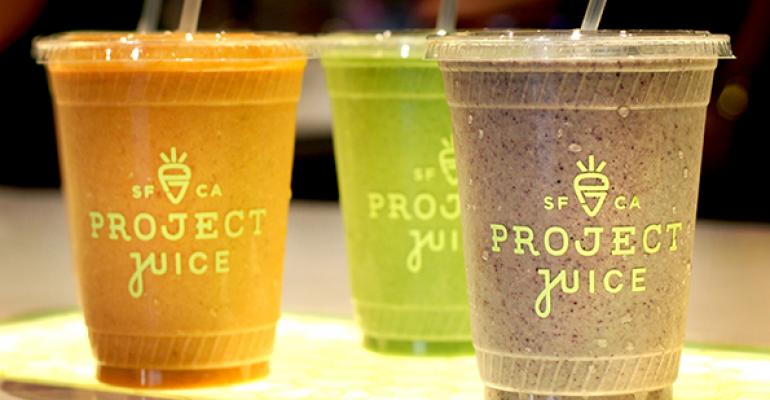 Project Juice is scheduled to open a new Test Kitchen unit in San Francisco this month that will bring a new fresh food lineup to the menu.

The newest Project Juice Test Kitchen, opened this week, is the 10th unit for the San Francisco-based chain, and one where consumers will vote on menu items to be rolled out across the system.

“We’re confident this is where the market is going and what the consumer wants,” says Greg Malsin, co-founder and head of the chain’s Northern California retail and sales. “We’re pushing the envelope and giving people things they’ve never tried before.”

Project Juice has long offered a few grab-and-go food items, but the new Test Kitchen will feature breakfast-focused dishes like a “superfood” oatmeal bowl and acai bowls topped with granola and local honey, as well as coffee from a local roaster, which is available with cashew and almond milk.

Soups and hot “elixirs,” like the “flu shot,” which is made with strong ginger, cayenne, lemon and orange juice, as well as hot matcha latte with cashew milk will be on the menu, along with the traditional lineup of fresh juices and smoothies.

“We have a smoothie made with cold-brew coffee that’s really popular,” he says.

What customers like will be rolled out to other units, where possible.

Both food and drinks at Project Juice are free of dairy, gluten, peanut and soy ingredients, which makes the concept more friendly to those with allergies.

While a number of juice chains are growing in California, including Jamba Juice, Nekter and Juice It Up, Project Juice is one of the few that uses organic produce almost entirely.

If a conventionally grown ingredient is used, customers are notified, says Malsin.

Too often, juice chains use “mystery liquids” and sweeteners. Project Juice uses coconut meat and coconut water and sweetens some beverages with dates.

“We feel like the attributes of being organic, transparency and innovation are key differentiators,” Malsin says.

The average check is about $15 with juices priced in the $8 to $10 range for about 16 ounces. Malsin said those who care about the organic positioning are willing to pay a little more.

Malsin credits his wife Rachel Malsin with co-founding the chain with partner Devon Briger. The Malsins and Briger moved to San Francisco about four years ago from New York and didn’t find the juicing spots they’d come to love.

Malsin and Briger first started juicing at home. That grew into a home delivery business, which remains a big component. In 2013, the partners began opening tiny juice-only retail outlets, which grew in size with number of locations.

Though the new Test Kitchen will be about 500-square-feet, some units are as large as 700-square feet, and Project Juice units will grow as the food side of the business takes off, predicts Malsin.

“Our roots are in California and our vendor and farming partners are here, but we see this as a health-and-wellness brand that will work everywhere,” says Malsin.