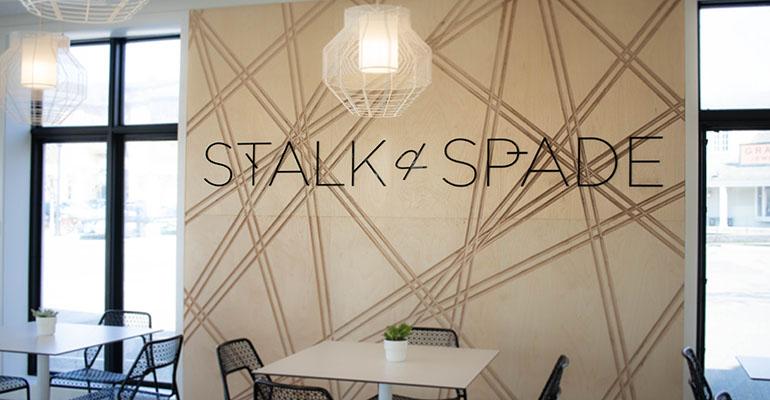 Smiley, who also founded the eight-unit salad concept Crisp & Green, has been a vegan since 2014 and is taking his plant-based expertise and franchise power to a new segment: vegan and vegetarian fast food.

The idea for Stalk & Spade was inspired by Smiley’s son who was craving a burger.

“I realized that I wasn't comfortable taking him to McDonald's or another fast casual [restaurant]. I wanted to build a new experience, and that very day the concept was born,” said Smiley. “That's where I decided that I could nix the industry completely and do something that's never been done before, and I owe the idea to him.”

Smiley has been a plant-based eater for decades and isn’t calling this menu “vegan” or “vegetarian” because the brand is trying not to be political. The food is simply plant based, but offers a meat-like experience, he said. 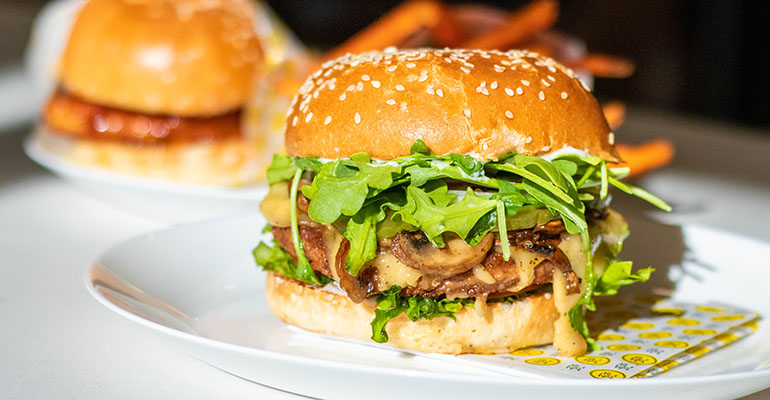 Stalk & Spade’s burgers are made of a proprietary blend that took Smiley and his team months to perfect — though he declined to reveal ingredients. He said the burger blend includes fewer chemicals and additives than a processed imitation-meat burger, maintaining the “healthy” element of the menu and driving it further from quick-service competitors.

The prices per meal aren’t quite at a quick-service level, they’re closer to fast-casual menu prices, as is the service time.

Burgers range from $9.95 for a classic with dill pickles, ketchup and mustard; to $11.95 for specialty burgers, like the Fiesta Burger, avocado, pepper jack, chipotle mayo, tomato, red onion and lettuce

“The reality of it is that in order to provide a plant-based option, especially a proprietary option, we're never going to have a $2 version, and that's okay. The reality is that people are willing to pay a premium for better ingredients and we've seen that across every industry in every category. So, we don't intend to compete at the very low end of the burger wars,” Smiley said.

The plant-based-chicken patties, during the first week of operation, have proven to be a surprise hit with customers, which Smiley did not expect. Options include the Crispy Chick’N sandwich with dill pickles, lettuce and mayo for $8.95; as well as the Spicy Sriracha Chick’N with Sriracha mayo, napa cabbage, jalapeno, Korean barbecue sauce and dill pickles for $9.95.

The non-dairy shakes — which can be flipped upside down with no movement, similar to another famous quick-service chain — have become a popular favorite, even among the meat-eaters in Minnesota.

“Of course, people want a burger and fries, but the number of milkshakes and ice cream add ons that we're doing is unbelievable,” said Smiley. “We've been told we're doing more volume than any other player in the industry, with the exception of a few of the Dairy Queens, and so to put us in that category that's pretty special.”

As for the ongoing supply chain issues that have plagued quick-service and fast-casual chains throughout the pandemic (for ingredients like chicken wings), Smiley is confident his new venture will avoid that entirely. Shortages of pork, beef and chicken don’t impact his operation and his experience at Crisp & Green has prepared him for large-scale supply chain management.

“Seventeen percent of all the lettuce and greens that come into the state of Minnesota flow through Crisp & Green, so we have an entire education on supply chain and how to make sure that we could scale for 60-plus restaurants,” said Smiley.

And while there is just one unit open, there are several in the works. Smiley, who plans to grow through franchising, would not say how many are in the pipeline, just that he “aims to be the next McDonald’s in terms of growth.”

“We will have a few corporate locations and plan to franchise the rest. We plan to be in all states across the U.S.,” said Smiley.