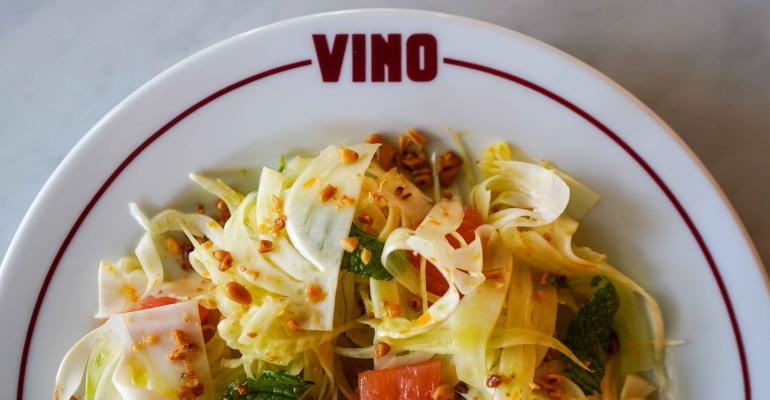 Major Food Group operates more than a dozen unique concepts and over 30 restaurants, bars, private clubs and hotels across the globe, from New York to Miami to Tel Aviv. Their footprint just expanded considerably, with three openings in Dallas within the span of one month.

The group, which is run by managing partners Jeff Zalaznick, Mario Carbone and Rich Torrisi, has had its eye on Dallas for years.

“As we’ve grown our business, there are so many people in our world that are from Dallas or recommended it, so that seed was planted many years ago,” said Carbone. “It has a like-minded energy and is a bustling place that’s very much in line with the places we love to be in and do business in. If we want to hang out there, we want to be there, which makes it pretty simple sometimes.”

Sadelle’s debuted in New York in 2016 and expanded to Las Vegas in late 2018. It’s a brunch institution famous for its bagel towers with sliced-to-order fish ($15-25), triple-decker sandwiches ($31) and chopped salads ($23-45). The Dallas location opened in mid-March inhabiting 7,000-square feet in an anchor position in the ritzy Highland Park Village retail center. Its dining room is joined by an all-day coffee counter and marketplace serving a range of to-go drinks, pastries, rotisserie chicken and breakfast tacos — the latter is an exclusive nod to Texas.

Carbone is an Italian restaurant with a mid-century vibe that opened in New York’s West Village neighborhood in 2013. The Dallas outpost debuted March 31 in the Design District and is the concept’s fifth location, following openings in Las Vegas, Hong Kong and Miami. It is 4,800-square feet of grandeur, with dark woods, gold crown molding and service captains dressed in burgundy tuxedos.

All of the restaurant’s signature dishes appear on the Dallas menu, including the spicy rigatoni with vodka sauce ($33), tableside Caesar salad ($25) and veal parmesan ($69).

Dallas is also the beneficiary of a unique concept called Carbone Vino, which opened April 7 beside its sibling and houses Carbone’s vast wine collection. It features a full bar and serves a handful of Carbone favorites, plus Vino-specific dishes, like pizzas ($22-$31), seafood crudo ($32) and a salumi board ($36).

“We’ve always wanted to explore different facets of the Carbone lifestyle and brand,” said Zalaznick. Most Carbone locations don’t have a true bar, so they saw this space as an opportunity to create a central bar where people can congregate and eat.

“Carbone is so iconic that we can’t change anything there,” added Zalaznick. “If we take a dish off the menu, there are riots. Vino feels like Carbone, but it also lets us play with new dishes like pizza and have a huge wine program.”

Vino was designed by Ken Fulk, who helped create Carbone and multiple other spaces for Major Food Group. The atmosphere draws inspiration from restaurants and hotels in Tuscany and Northern Italy, and is meant to exude an old-world feel that Fulk said “celebrates a leisurely European mindset.”

Although new to town, the co-founders said the reception in Dallas has been warm and welcoming. Mario Carbone attributes the full dining rooms to the reputation they’ve built up over the past decade. “There was a lot of excitement when we announced we were coming here, so we came in with a bit of a running start.”

Major Food Group has no immediate plans to expand their business to more locations in Dallas or surrounding cities, but they’re always on the lookout for opportunities.

“Right now, we’re focused on Sadelle’s, Carbone and Carbone Vino, but I have no doubt there will be more to come just because we love this city so much,” said Zalaznick.