Patio culture — even before the pandemic made it de rigueur chic — will play a starring role at the soon-to-open Loro Asian Smokehouse and Bar in Dallas, which Hai Hospitality is expanding from Austin this July, the founders said.

“If Uchiko from Austin had gotten on a motorcycle and Franklin Barbecue jumped in the sidecar — and we were both wearing little white scarves and goggles — that's exactly what Loro was,” Franklin said in an interview this month with Cole.

Related: Chefs on the move: Shuffles at Hai Hospitality, the new crew at Moon Rabbit and more

“I pride myself with being a good patio person,” Franklin said. “There's something that's just unethical to me about eating indoors.”

Dining outdoors in Austin tends to build community over cold beers and chips and salsa, he added. “Much like at Franklin Barbecue, you always meet new people and you make new friends,” he explained. “I look forward to kind of that patio culture and the enjoyment just sitting out at Loro. I really look forward to doing that in Dallas and then later on some other cities.”

Loro and Uchi owner Hai Hospitality was able to plan the expansion, with an opening expected in late July, with the help of a November investment by private-equity firm KSL Capital Partners,

“It enabled us to do it a little quicker,” Cole said, adding that the investment gives the company the ability to open both Loros and more Uchis. Otherwise, he said, “We would have had to try to boot-strap it.” 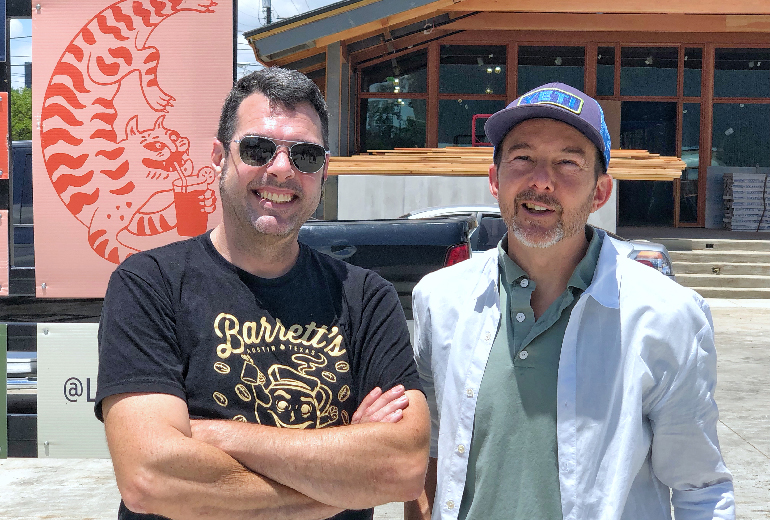 Cole said the expansion 200 miles away to Dallas, which already has an Uchi, allows the Hai Hospitality team to gauge the concept’s success.

“Obviously it's a big risk,” he said. “It's a leap of faith, but I think we're confident in the people and the concept. … We're hoping it plays out wel,l so I'm excited to see the future of Loro in Dallas.”

The Loro is under construction in a gentrifying area of East Dallas. Cole and Franklin said it will be about the same size as the Austin location, but with slightly reduced patio seating.

“Dallas felt like a good home for it,” Franklin said, “so we're dipping our toes a little bit.”

Cole said the marriage of barbecue and Asian food has been popular in Austin since Loro’s opening three years ago. The best seller is the brisket plate, but side dishes like corn fritters have also been strong items, he said.

Smoked baby back pork ribs come with cauliflower pickles and green onion and oak-smoked salmon is accompanied by cucumber-yuzu broth, parsley and lemon. Sides are even more Asian inspired, with corn fritters served aside sriracha aioli and cilantro and sesame rice noodles with chili vinaigrette. The proteins can also be ordered in bowls with coconut rice, pickles and Thai herbs.

Franklin noted that Cole’s Uchiko and his highly popular barbecue restaurant opened within a year of each other in 2009 and 2010, and he and his wife, Stacy, would eat at Uchiko often.

“I'm pretty sure that that you guys influenced what I was doing just a tiny bit,” Franklin recalled the interview with Cole, “so I feel like we were on congruent paths, and then eventually we just kind of like crossed the streams.”

Cole said the menus will be similar at the two Loros, and Franklin said the new unit will have some local twists, including area-brewed beers. The restaurants take no reservations, with the bar and patio serving as a waiting area.

“From the beginning, Loro was meant to be very casual with a big patio and picnic tables so nothing fancy, nothing pretentious,” Cole said.

And the concept remains well-suited for off-premises sales.“It really works out good for it to-go and curbside,” Franklin said.

Even before the pandemic, the Loro team worked on to-go containers and how the food was transported, Cole noted.

Update June 15, 2021: This story has been edited to include the Loro Dallas opening date.

Kerry Heffernan demonstrates how to eat an oyster
Jul 01, 2022