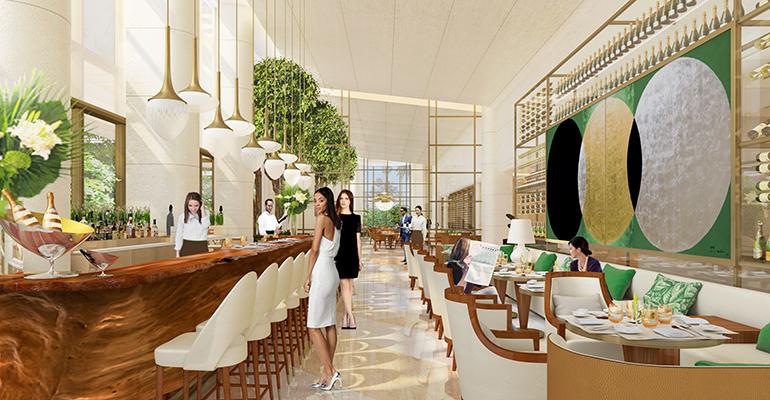 <p>Vongerichten will develop a signature fine-dining restaurant and a poolside rooftop concept for the luxury property.</p>
Trends>New Restaurant Concepts

Acclaimed New York restaurateur Jean-Georges Vongerichten is coming to the West Coast for the first time with a restaurant scheduled to debut in the new Waldorf Astoria Beverly Hills.

The luxury hotel is scheduled to open in 2017 with 170 rooms and 12 stories designed to “pay homage to Hollywood glamour and the effortless luxury of the California lifestyle,” according to press materials.

Vongerichten will develop a signature fine-dining restaurant within the hotel, as well as poolside dining on the roof.

Details on the concept have yet to be revealed, and officials with Vongerichten’s restaurant group declined to comment further. But the seasonal menu will feature local and organic ingredients, and will support independent farmers and fishmongers, officials say.

“I’m excited to have found the perfect partner to make my West Coast debut and bring my culinary passion to one of the world’s most prestigious hotel brands,” Vongerichten says. “I truly value the opportunity to bring exquisite food and discerning guests together in one place and look forward to becoming a part of the Beverly Hills community, bringing a new inspiring environment to life and having a presence in California for the first time.”

Born outside Strasbourg in Alsace, France, Vongerichten has developed roughly 30 restaurants around the world. In New York, he’s known for the restaurant Jean-Georges, which has three Michelin stars, as well as ABC Kitchen and ABC Cocina.

“We’re thrilled to partner with chef Jean-Georges, an acclaimed talent in the restaurant industry, to bring true epicurean excellence to Los Angeles,” says Luc Delafosse, the hotel’s managing director. “We both share a passion and understanding for creative techniques and superb quality in culinary arts and exceptional service, a philosophy that is infused throughout Waldorf Astoria Beverly Hills.”